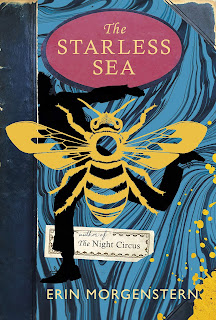 Erin Morgenstern's first novel, The Night Circus is one of my favourite books, so I was awaiting the infamously difficult second novel with a mix of anticipation and concern. Now I've finished reading it, I think both emotions were appropriate.

Although still a fantasy with a partial real-world setting, The Starless Sea is a different kind of book to The Night Circus. As both have something of a period feel (despite The Starless Sea being set in the present day), I would say that the new book is like an Impressionist painting to the first novel's Pre-Raphaelite. In The Night Circus, the attraction of the book was crystal clear - here it's fuzzy and consists more of light than detail.

Overall, The Starless Sea is a very clever creation, intertwined in a complex fashion. Most of the narrative has interlaced fairy stories, which initially seem to be little elements on the side but gradually weave their way into the whole. It's a long book - perhaps a tad too long - but there's plenty going on... it's just not always obvious why, or where it's going. The protagonist, Zachary Ezra Rawlins, is a grad student who mostly studies computer games and quite often the experiences he goes through feel like taking part in a massive fantasy-based adventure puzzle game - for classic games lovers, The Seventh Guest or Myst on steroids.

A useful comparison is one of the greatest American fantasy writers, Gene Wolfe. In quite a few of Wolfe's books the reader has to suspend frustration as the author piles in confusing elements that only come together in the end to make a magnificent whole. This happens here as well, and often is done well - but some of the confusing elements come too near the end and never truly resolve.

I don't want to sound negative here. I very much enjoyed reading this book, and it was a daring move on the part of Morgenstern. But it didn't come together as brilliantly as I hoped or as cleverly as it promised.