A Farewell to Schedules 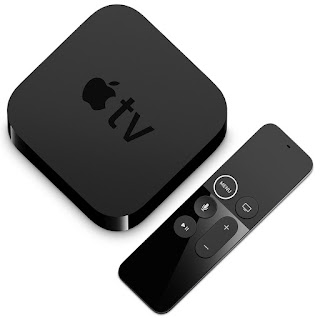 The COVID-19 change in lifestyle seems to have accelerated something that has been coming for a while - we have now entirely abandoned watching TV at the broadcast time, and, for the most part, only stream programmes.

The only things we don't stream are any programs we want to watch on ITV or Channel 4 - these are recorded on a PVR (digital personal video recorder) so we can skip through the adverts. But for the rest, which is a mix of BBC iPlayer, Netflix, Britbox and Amazon Prime, it's streaming all the way. This means we spend most of our TV watching time using the excellent Apple TV box - again, it's only for ITV and Channel 4 we have to switch back to the PVR, and currently, in the summer desert of interesting new material, such times are few and far between.

There's a wonderful freedom to moving away from the schedules. If we want to watch, say, three episodes of Mrs America on the BBC in a row, we can. Or to simply ignore something for a few days and then come back to it without worrying if it recorded okay.

I've long argued that the BBC needs to move from a legally enforced licence fee to a subscription model. This new way of viewing emphasises this even more. I'd happily pay an iPlayer subscription to do away with the need for the licence fee - and it just makes so much more sense. I was delighted that in his excellent book The Nanny State Made Me, Stuart Maconie also argues for moving away from the licence fee. His reasoning is different from mine, but equally valid. Maconie points out that the licence fee means that the BBC ends up pumping out loads of trash because it has to be everything to everybody, where a subscription would enable it to do what it does best and only that.

I read a ridiculous article by Polly Toynbee the other day claiming 'The government’s next assault [after the BBC stopped providing free licences for over-75's] is their proposal to decriminalise non-payment of the TV licence, effectively making it voluntary.' What? So is she saying it's voluntary to pay for everything else where it's a civil offence not to pay? This is ludicrous. Making non-payment of the licence fee a criminal offence means thousands of people get unnecessary criminal records. But it also underlines what a terrible system the licence fee is.

I appreciate that not everyone is ready to go straight to streaming (though I suspect most younger people are) - but surely it's time we had a hybrid system where you either get a TV licence or can subscribe to iPlayer without a licence? The world has changed - the BBC's funding has to as well.
broadcast streaming TV TV licence