The Issue at Hand - Review 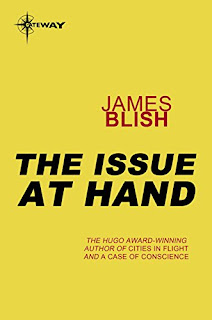 This is one for the real SF nerds. It's a collection of articles, framed around reviews but giving more opinion on what makes a good science fiction story than would be common in a review, written by James Blish in the late 50s and early 60s. Fairly obscure stuff, admittedly - I've only heard of about 10 per cent of the stories and half the authors mentioned - but it is still interesting both from the insights Blish (writing as William Atheling Jr.) gives and from the sheer vitriol he pours on stories he doesn't like, even from revered names such as Asimov and Bradbury.

Part of the usefulness to would-be writers of science fiction is that Blish underlines some of the pitfalls they face, whether they be basic writing errors (he tears into a couple of newish authors for the wild variety of alternatives to 'said' they use in reporting dialogue, a classic beginner's mistake) or problems that are specific to the SF genre. The only one of Blish's complaints I would fundamentally disagree with is that he insists that it is essential to describe characters, where often I find the descriptions that were common in the period he was writing entirely unnecessary.

I was quite surprised initially when Blish lays into Bradbury - but reading further it's clear that he very much admired Bradbury's writing talent. What he complains about, rather, is when Bradbury strayed from the natural home of his writing, fantasy, into science fiction, where his total ignorance or lack of interest in scientific matters makes the whole enterprise uncomfortable reading. I've always been mildly horrified that practically the only science fiction book from a supposed SF writer that the literary establishment were capable of celebrating was Fahrenheit 451 - it may be closer to SF than much of Bradbury's so-called science fiction stories, but it is still painfully flawed (and not just because, as I discovered by trying it as a youth, paper doesn't spontaneously ignite at 451 degrees Fahrenheit).

That acerbic side of Blish's comments reminds me of how much fun negative reviews can be to read. You hardly ever see vicious reviews anymore, and that's a real shame. (In fact, I was once asked by a magazine to make a review more supportive because they didn't like to run negative reviews.) It makes me feel like I ought to write more. Having said that I have been quite pleased with a couple of mine - one on the truly dire Murder in the Snow by Gladys Mitchell and the other about a colouring book by an otherwise respected author who I won't name here, but who rather embarrassingly (for him) messaged me to complain about it. It's a bit like the way we don't get enough scientific papers with negative results - if all the reviews you see are glowing, the whole process lacks context and value.

The Issue at Hand is very much a specialist title. It is only going to appeal to real devotees of the genre. But I'll be buying the sequel very soon. The book is obviously long out of print, but available on Kindle thanks to the wonderful Gollanz SF Gateway reprints from Amazon.co.uk and Amazon.com.