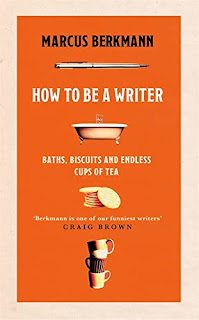 There seem to be three obvious markets for this book - people who are interested in what writers do, people who would like to be professional writers but aren't, and writers themselves. That last category may seem an unlikely one - if you are already a writer, why would you need a book called 'How to be a writer'? But the reality is I spent some of my cash, hard-earned from writing, on this book.

The reason the book appealed, I think, is the familiar concept of readers liking to identify with a book. This has led to much more diversity, for example, in fictional characters - but it is also engaging to read about someone who does a similar job and their experiences, especially when the narrative is handled in such a light and entertaining way as Marcus Berkmann does here.

I can certainly identify with much of Berkmann's working life - both the highs and lows of being a freelance writer. What's particularly fun is that Berkmann has written a whole range of columns and reviews, from off-the-wall observations on life to sometimes astringent reviews of books, music and films. Obeying one of the essential rules of being a freelance - always reuse material if you can - Berkmann peppers the book with examples of his writing from his long-running career, including pieces that have appeared in both national newspapers and familiar magazines. He's always prepared to indulge in some humorous self-criticism, which works particularly well in this context.

There is one aspect of the trade that I don’t think Berkmann has got a handle on: the difference between being a London-based writer and the rest of us. He tells us that lots of writers he knows don’t drive - try that if you live in the country. Similarly, he seems to spend a lot of time at publisher parties and book launches. When I get invited to something like that (because they’re always in London) I have to factor in half a day’s travel and hefty transport costs. So I rarely do it for the distinctly limited benefits that accrue.

This minor point aside, How to be a Writer is a very entertaining little book, ideal, as I used it, as a non-taxing holiday read. Recommended.

How to be a Writer is available from Amazon.co.uk, Amazon.com and Bookshop.org.