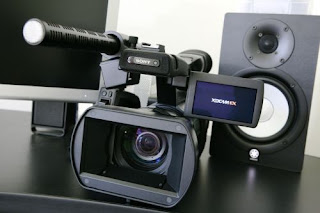 A couple of days ago a film crew descended on my house to record an interview on quantum theory.

Well, if I'm honest (I was talking about storytelling yesterday) it was two students with a video camera.

And in practice, both these statements are deceptive. The first sounds all professional, slick and well prepared. The second sounds haphazard and amateurish. I must admit, when Jane Weavis from Royal Holloway in London got in touch about doing the interview for her Physics and Science Communication course I was a touch doubtful. But hey, she was prepared to come all the way out to sunny Swindon (I'm not sure if she realized quite how far it was), so surely I could spare a half hour, however uninspiring it might turn out to be.

Jane turned up with a media studies mate in tow as camera person, we got set up and, I have to say it was one of the slickest and best prepared interviews I've done. So often with a professional broadcaster they haven't really got a clue what my book or the subject is about. They've read the press release and picked out a couple of juicy points. (When I did Global Warming Survival Kit, for example, every single one asked me about eating worms.) But their questions are often shallow and near-irrelevent. There are exceptions like our local man, Mark O'Donnell, but they aren't too common. However, for this interview, the questions were well structured, clearly founded on knowledge, and interesting.

Admittedly there were a couple of challenges. When we started the interview, the camera wouldn't switch on and both members of the team had an anxious minute or two fiddling with menus and muttering. And a fly decided to take residence behind the window blind alongside me - until it was dextrously caught and removed by our ace reporter. However, I've seen both BBC and commercial people struggle with technical problems too.

All in all, a very positive experience. It's just a pity that the resultant masterpiece won't be airing outside a course assessment.
interviews media video