How oxygen was first discovered in an adventure playground 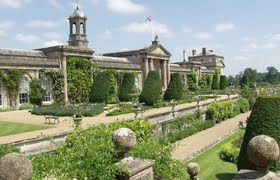 Yesterday I had another of my outings with BBC Wiltshire to a science/technology site in the county. The target was Bowood House between Calne and Chippenham, which is known to anyone with children in the county as the best outdoor adventure playground in the vicinity. I have to admit to my shame that in all the visits I've made with the kids I never once noticed its scientific gem - the laboratory where Joseph Priestley discovered oxygen.

It was a lovely sunny day for a visit to this rather odd country house. Odd because the house itself was pulled down in the 1950s, and the 'house' now available to visit was really just the service block of the departed 'big house'. Luckily, Priestley's lab was (just) out of the big house itself.

One thing I love about these visits is the behind the scenes feel, taking me back to my British Airways days, when I always used to feel rather special going airside at Heathrow as part of my job. At Bowood it was curator Kate Fielding who led BBC presenter Mark O'Donnell and me in through the back route, heading via the kitchen and the currently stripped tea room (the house opens to the public in 2 weeks time) to the orangery (now a picture galllery) and next to it Priestley's laboratory.

This small room - maybe 4 metres square - seems smaller now because it is surrounded by bookcases, which weren't there in Priestley's time. It has none of the feel of a laboratory - it's just a typical country house room with no doors, but a wide opening onto the South front. It was the windows here, outside the lab, that Priestley used to capture sunlight with a large burning glass, which he focussed on mercuric oxide and produced a gas with strange properties like re-lighting glowing spills and keeping mice alive. A gas he would call 'dephlogisticated air' (it was the French chemist Lavoisier who named oxygen soon after in his radical shakeup of the naming of chemical substances).

We had lots of fascinating input for the recording from a classic amateur enthusiast, retired GP Norman Beale, who has made a study of Priestley's time in Calne and at Bowood. Mostly we inevitably concentrated on Priestley's work in the house, sponsored by the Marquis of Lansdowne, but there were inevitably some references to his other achievements, from inventing soda water to having his house burned down by an angry mob for his republican views. I also learned about the Dutch scientist Jan Ingenhouz, the discovered of photosynthesis. I knew the name, but not that he did his key work in the UK, nor that he spent his last years (after his discovery) at Bowood.

If I'm honest, Wiltshire hasn't got the greatest record of scientific discovery - but it's still fascinating looking into these locations, being in the places where something significant happened, and tapping into the local knowledge and enthusiasm for the subject.