A quite interesting year 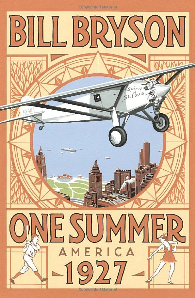 The 'quite interesting' year I refer to is not a look back at 2013, but a glimpse of the summer of 1927 given to us by Bill Bryson in his latest book. In fact a glimpse is a bit of an understatement as a description of this doorstep of a tome.

As the cover suggest, one of the major themes of the book is the rise to outstanding fame of Charles Lindbergh as a result of his aerial Atlantic crossing. As Bryson surprisingly informs us, this was not actually the first crossing by air but around the 120th. It had certainly been done by plane earlier by Alcock and Brown. But somehow Lindy's flight caught the imagination of the world and he became a superstar.

The rise and fall of Lindbergh occupy a fair amount of the book, but we also meet his competitors and other notables of the period in America from politics to sport (notably baseball and boxing) and bringing in everything from famous murders of the period (through to the details of their electrocution) to the sad disaster that was prohibition and the gangsters who profited from it.

Overall, Bryson's skill is in weaving all this together into an enjoyable tapestry. If I'm honest I much prefer his travel books, where the personal story and humour makes the writing a lot more fun, and I had to skip over the sports sections which I found deadly dull, but despite being about an obscure year in a foreign country it still made for a very readable book that kept the pages turning.

For me, one of the greatest delights of the read was finding out more about Texas Guinan, who features in one of my favourite numbers from the Yale Song Book, George Jones.

You can find out more about One Summer at Amazon.com and Amazon.co.uk
Using these links earns us commission at no cost to you