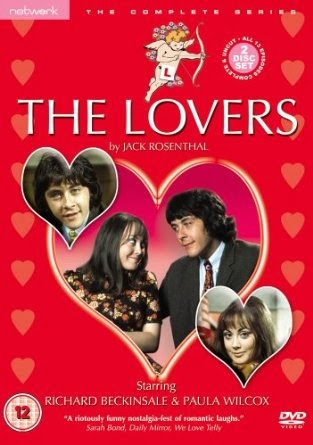 For Christmas I got a DVD set that took me back to my youth. It was the Granada comedy series The Lovers. I hadn't seen this programme, written by the late, great Jack Rosenthal, since it was first broadcast in 1970/71 and was a little nervous, because at the time I thought it was brilliant. In fact, despite the inevitable ageing, going on the first episode (all I've seen so far) it has in many ways stood the test of time, because it was genuinely unique in style and approach.

The show features Geoffrey and Beryl, who have just got back together after going out a while before. The basic premise sounds tired and dated - Geoffrey wants to have sex, Beryl wants to get married - but the way it is handled makes it far more interesting. After all, it was a new world. As Geoffrey points out, in the trendy 70s 'everyone is at it', so why not?

There are two things that made the series great - and still make it watchable, though not as funny as it once was. The first is the writing. Rosenthal mixes very naturalistic dialogue with strangely poetic lines, delivered in an almost artificial way that make the whole thing feel special. This was clear from the opening, where we see the two main characters (and despite various supports, this really is a two-hander) and hear their thoughts for a good few minutes before anything really happens. There are also some aspects of the writing that were deliciously memorable. Despite a 43 year gap since seeing it, I could remember that Beryl refers to Geoffrey as 'Geoffrey bubbles bonbon', and could also remember one line (approximately) that I am sure is in there, though I am yet to encounter it: 'Everything has an end, Geoffrey, except a [black] pudding, which has two.' It's no surprise that both those examples have a character's name in them: one of those poetic artificialities is that the two leads use names in dialogue far more than is natural.

The second contributory factor was the actors themselves. I have to be honest, at age 15 I was a little in love with Paula Wilcox (if not Beryl) - and she is quite remarkable. She delivers Rosenthal's lines with aplomb, but is out-acted by the remarkable Richard Beckinsale. Because he died so early, Kate Beckinsale's dad only ever acted as young man, but his ability to come across as truly likeable and intelligent (as the characters point out, they did get their O-levels) yet occasionally a little slow to catch on is superb.

If, on my recommendation, you decide to take a look at it, I ought to warn you that there is a truly shocking line in the first episode. Before they get back together, Geoffrey and Beryl are covertly watching each other and thinking about their former boyfriend/girlfriend. At one point in each chain of thought they get so carried away that their thinking is said out loud - when each is standing next to an increasingly shocked woman with two children. Geoffrey's out loud line is horribly unacceptable now. I can't imagine it was brilliant then, though to be fair to Rosenthal, what I think he really would have wanted to write was a more straightforward expression of sexual desire, which would have been unbroadcastable then, but what was written sounds horrendous now. I know they should have known better, but bear in mind that this was broadcast in the heyday of On the Buses. We can't really judge output of the period by today's standards.

Is it dated? Well, of course. The colour is washed out and everything feels a bit Warmington on Sea. But the handling of the difficult dance of courtship is wonderful - as are some of the period observations. At one point, Geoffrey comments (while standing outside Beryl's front door) 'I see your neighbour has BBC2') to which she replies 'Only the aerial.' I had totally forgotten the switch from 405 lines to the higher resolution 625 line broadcasting that came with BBC2 and how it required very visible new aerials. BBC2 also, of course, brought colour - and that was the final surprise, as I originally saw The Lovers in black and white, but now could see it as intended.

Overall, a great trip down memory lane, and a truly innovative series that makes many modern situation comedies look unimaginative and dull. If you want to take a look, it's available on DVD at Amazon.co.uk.