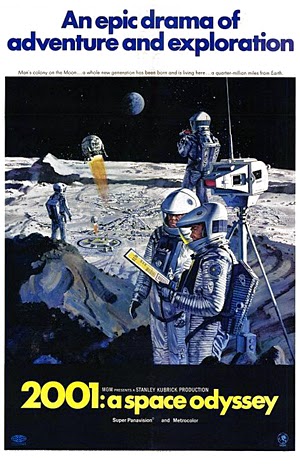 For Christmas I was given a Blu-ray of the movie 2001: A Space Odyssey. I quite often refer to this film in my books, usually to point out the dangers of making extrapolations based on the present, but it's the first time I've actually watched it properly since seeing in Cinerama in 1968, and I have to say that one segment absolutely blew me away.

Effectively, it's a film in four parts. There's the first 'dawn of man' segment, which these days looks rather hokey, a second section on a space station and the Moon, the third on Discovery's voyage to Jupiter and the fourth the weird bit through the stargate that no one really understand.

The part I've usually criticised is the second. Here, for instance, we see space shuttles operated by Pan Am (remember them?) and a Bell Telephone operated video phone with large screen live video - but no mobile phones. However I had forgotten just how great the third segment is.

This is the part with the infamous HAL 9000 speaking computer who becomes murderous (giving us the film's catchphrase line: 'Open the pod-bay doors, Hal.' Of course, once more the tech extrapolation is way off. Here we have a pretty well sentient computer built in the 1990s and the ability to send a manned mission to Jupiter in 2001. If only. (For IT history buffs, by the way, it struck me for the first time that when Dave takes out Hal's circuits to 'kill' him there is an interesting reversed parallel with the old IBM 'golden screwdriver' trick, but that's a different story.) However, there were three aspects of this segment that were stunning.

First was the silence. Kubrick made the brave decision to play it how it really is, so whenever we see action out in space, it is completely silent. When it's from the viewpoint of someone in a spacesuit, you hear their breathing, but in the 'outside' shots it is dead, eerily silent. This is particularly effective when Dave has to enter the ship without a helmet and is blasted into the airlock by the outrush of air from the pod. Wonderful - and really shows up pretty well every movie since.

Second is the quality of the visuals. As we watch the Discovery float past a star field it's easy to be blasé, because we have seen it all so many times with CGI. But what you have to remember is that this was 1968. There was no CGI - or anything even comparable in looks. This was the original and it still looks stunning. Much kudos to Kubrick, Douglas Trumball and the rest of the special effects people.

Finally there was the interior environment. It would be impossible to send a mission to Jupiter without using some sort of rotating environment to provide artificial gravity - and there it is in all its glory. (Admittedly, I think the diameter is too small to avoid motion sickness, but that's being picky.) And boy does Kubrick use it. His main interior set is basically a circular strip that the two main characters walk around the inside of. Wherever their feet are, is down. So you will see them walk to what was, effectively, the ceiling to sit in a chair - all looking perfectly natural. It is a work of genius.

The shame is, I don't think many young sci-fi movie buffs would have the patience to sit through it, because it is glacially slow. In 1968 these visuals were so jaw-dropping you could happily spend 5 minutes just watching a spaceship passing - but it is agonisingly slow now. Bring yourself to get past that, though, and you can only marvel at the wonders of this film.