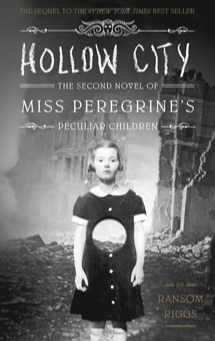 Very occasionally someone comes up with a really impressive and exciting new idea in fiction, a phenomenon that is particularly strong in the Young Adult/crossover market. It isn't necessary for success, of course. Anyone who had read the 'Worst Witch' series would hardly consider Harry Potter to be an original concept, but it didn't stop that doing rather well. (I'm not denying JKR's books had much more to them, just talking as a basic idea.) But in his novel Miss Peregrine's Home for Peculiar Children (reviewed here), Ransom Riggs really hit pay dirt for originality that makes you gasp.

The story was built around a series of weird and wonderful Victorian/Edwardian photographs, which worked brilliantly to give the story an unusual depth of atmosphere. Now Riggs is back with the sequel, Hollow City. When I reviewed the first book, I was a little concerned that the approach would pall in any future titles, but it soon drew me back in.

In fact, the photos are used very cleverly to bring us back to the action by starting with a dramatis personae with the photographs that inspired all the main characters. This is very clever - I had pretty much forgotten the detail of the plot (I'm very poor at remembering stories and can usually re-read a book in about a year almost as fresh), and this gave me some visual cues to recall and put into context what was happening.

Things are pretty dire for our heroes in this episode in the series (we are told at the back that the next volume is 'coming soon'). The 'loops' where the peculiar children reside have mostly been destroyed and their mentors captured by the evil baddies, who are made doubly nasty by being corrupted versions of the peculiar children (fallen angels, you might say). Miss Peregrine is stuck in bird form and will not be recoverable unless she is treated within a few days, adding a strong time pressure to the plot, which takes the children to wartime London.

It works very well, particularly the second half of the book. As before, Riggs piles in lots of story elements, and there's a twist that genuinely takes the reader by surprise. The best of the photos are truly bizarre and wonderful, including the image on the cover and Miss Wren's remarkable hut.

Things aren't 100 per cent perfect, though. Rather too many of the images are murky - I was reading a rather expensive (for young adult) hardback, and I would have expected better reproduction (or the selection of clearer originals - plenty of photographs of this age still have excellent contrast). I was also a bit disappointed by the use of the striking image on the cover in the storyline, which was surprisingly fleeting. And there was rather too much soul searching and wordy exposition in the early parts of the book. And the ending is very abrupt and 'to be continued'. But that didn't stop this series growing into one of my favourite YA fantasies ever, coming in just behind Alan Garner's work and the stunning Night Circus.

All in all, a must-read if, like me, you are already a Peregrine fan (if it's fuzzy in your mind, re-read the first book to get back into the swing, though it's perfectly possible to pick some of it up here), and a great addition to any YA fantasy shelf (if you haven't read the first book, do read that first).

Find out more an Amazon.co.uk and Amazon.com.
Using these links earns us commission at no cost to you
books fantasy fiction photographs review reviews time travel young adult