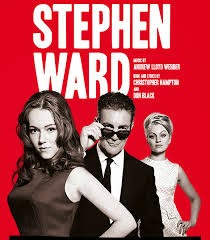 I feel a bit sorry for Andrew Lloyd Webber. Only a bit, you understand. But he is probably feeling a bit depressed about his latest musical, Stephen Ward, which closed at the weekend after running for less than four months with so-so ticket sales.

It perhaps wasn't the most inspired of choices for the subject of a musical. Outside the UK no one is likely to have heard of the Profumo affair, and even here, what was once a national scandal has become a vague, faded memory. Yet there is no doubt that there was an interesting story there.

We went to see Stephen Ward on Friday, its penultimate day, and I'm glad we did. It was no Cats or Phantom of the Opera. It wasn't packed full of memorable tunes. It only really had one lyrical song, though there were a couple of distinctly effective pieces (even if the one for the orgy scene is worryingly reminiscent of Bustopher Jones in White Spats in places - though ALW has always had a habit of reusing musical flourishes). Notable was the opening song, Human Sacrifice, with its bizarre setting of the Blackpool chamber of horrors, an extremely atmospheric piece. All in all, though, it was an effective evening's musical theatre. And as well as making for an enjoyable outing, it did really make you think about the hypocrisy of the establishment in the early 60s.

I would much rather go to a fine but not flashy work like this than a large scale 'musical' that is just a rehash of existing pop songs in a strung-together storyline like Mamma Mia or We Will Rock You. At least this was original music, written for this story, and producing a whole with a degree of integrity. So while I can understand why Stephen Ward wasn't a hit - and I would have been reluctant to have paid full price to see it - I think that it deserved to have been seen by rather more people. And that genuinely does make me feel the teeniest bit sorry for our Andrew.
flops musicals theatre West End