Review - Among the Creationists 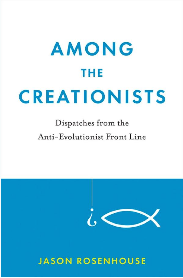 Subtitled 'dispatches from the anti-evolution front line', Jason Rodenhouse's book is a fascinating look at creationism from the outside. Rather than simply poke fun at silly creationist ideas, a game that palls rather quickly, Rodenhouse attends creationist and ID (Intelligent Design) conferences, visits centres and generally immerses himself in the culture, in particular its interface with science. While he does this from the point of view of an atheist, he is respectful of those he is meeting with, and in return, repeatedly emphasises that even when he asks difficult questions after a lecture, he his treated with warmth and kindness, rather than booed and heckled.

In effect, the book has two different types of chapter. Some delve into the detail of creationist and ID beliefs and make strong efforts to see if there is a way to justify them. The only trouble with these chapters is that, even though they always end up coming down against the creationist view, it can be a bit like reading a theology or philosophy textbook - it gets a little stodgy sometimes. By contrast, the book really livens up with the other chapters, which describe Rodenhouse's experiences, what he witnesses at the events and the creationist centre he visits, and the conversations he has with creationists (including a fairly heated one in a queue for a Subway sandwich).

If you read this hoping to find that Rodenhouse changed his opinion - or managed to change the opinion of a single creationist - it isn't going to happen. But if you come at it from an atheist viewpoint (as I suspect most of the readers will), you will learn a lot more about what creationists believe and why - often because of being presented with distorted facts - and if you come at it as a Christian, you may find some uncomfortable thinking is generated by its careful arguments. More so, in fact, than from the polemic school of Dawkins, Hitchens et al.

The only chapter I wasn't totally happy with was the one entitled 'Why I love being Jewish,' which suffered a bit from American parochialism. Rodenhouse classes himself as a cultural but non-religious Jew. He enjoys Jewish culture and ritual without believing in God, and seems to suggest that this is something unique about Judaism. However, in the UK I'd say that I have come across a similar approach to a good few religions - Hinduism, for instance - and especially in the UK in the form that Astronomer Royal Martin Rees describes himself as a 'Church of England agnostic' - again, someone who enjoys the culture and ritual without having a religious belief.

Overall an interesting book if you really want to get to grips with why creationism is so strong in the US. See more at Amazon.co.uk and Amazon.com
Using these links earns us commission at no cost to you
creationism intelligent design review reviews science