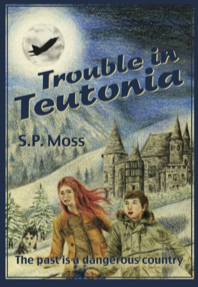 I enjoyed  Trouble in Teutonia (by S. P. Moss, who recently contributed a guest post for this blog), because for me it was pure nostalgia. Since I stopped reading to my daughters (something I really miss) I don't read many children's books, usually only straying into the rather older targeted YA books that are intended to cross over to an adult readership, where this seems solidly for young people. But the nostalgia wasn't so much for those bedtime stories as for the kind of tales I used to read when I was that age.

For one thing, a lot of my comics when I was young were still set in World War 2, with the Germans inevitably the baddies, and the heroes being plucky British servicemen (not many women, sadly). This story may be set primarily in the early 1960s (where our modern hero is plunged back in time on a carousel to once more meet his then young airman grandfather), but the feel is still very reminiscent of those war stories. There's almost a touch of Biggles. I never liked the actual Biggles books, but I loved W. E. Johns' science fiction series when I was 9 or 10 (I've read one since - they're terrible!), but I don't mean that the Bigglesy flavour is a bad thing, it just contributes to that feeling of nostalgia. What's more, the war comics almost always seemed to involve attacking an underground submarine pen, reminiscent of the main setting here (and of early Bond movies).

There are a few nice puzzles to crack as young Billy works to free the trapped heroine - she's suitably feisty, though I don't think she had enough to do. In some ways, my favourite part was the handling of another character who is also in the present and the past sections of the book - the rich Leslie de Winter of the 21st century 'top and tail' sections of the book, who in the past is just Airman Les Winter, something of a sad character, making the modern day, pompous man, who initially comes across as a total waste of space, as someone with more pathos.

What slightly grated for me was the way the book was primarily set in 'Teutonia' which is Germany (down to people speaking German, not Teutonian) with a different name. I really couldn't see the point of this - I prefer real settings for books and there didn't seem any reason for this name change.

However, it's a rollicking, fast paced adventure, with a bit of time travel thinking thrown in, primarily requiring a bit of care because Billy has already travelled back in time in a previous book to have an adventure with a slightly older version of his grandfather, so knows parts of his relative's near future. It should go down well with its target audience, particularly those 9-12 year olds who struggle to find a book they'd like to read.

You can find Trouble in Teutonia at Amazon.co.uk and Amazon.com.
Using these links earns us commission at no cost to you
books children's books fiction reviews time travel