July 28, 2014
One of my early popular science books, The Man Who Stopped Time, was on the photographic and moving picture pioneer, Eadweard Muybridge, who did most of his work in Pennsylvania and California, but who was born in Kingston-upon-Thames. Here's an account I wrote at the time of hunting for Muybridge in Kingston.

When getting under the skin on Edweard Muybridge you can’t avoid Kingston-upon-Thames. It inevitably means regular visits to the North Kingston Centre, an unfriendly, echoing civic building tagged onto a school, which houses the local history room. The room, entered through a strangely bunker-like door, resembles every reference library you have ever been in. Old well-used tables, a slightly musty smell and a few modern contrivances – PCs, photocopier, microfilm readers – sitting uncomfortably alongside the huge bound volumes of the local paper. Very friendly and helpful staff, though.

But that’s a little world of its own as is the Kingston Museum, with its dramatic Muybridge exhibit taking up a sizeable corner of the small, unassuming building. They are great sources of information, but they aren’t the Kingston that Muybridge knew. However, three significant sites remain for the Muybridge groupie – the King’s Stone, the Muybridge family house (and workplace) and the house he spent his last years in after returning from America. 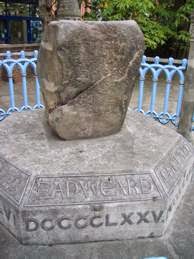 The King’s Stone, that one-time English Stone of Scone, later used as a mounting block in the marketplace, stands in splendid isolation outside the ugly curve of the Guildhall, a circa 1930s monstrosity of brick and verdigris. (The verdigris may be a false memory.) The stone itself is set around with protective railings, in a surprisingly pleasant tree-lined area with bench seats, a platform over the river that disappears underground just before reaching the site.

They’re a little faded now, but you can still make out those early English kings’ names, including the two distinctive ‘Eadweard’s that almost certainly inspired Edward Muggeridge to start his gradual transformation into the more dramatic Eadweard Muybridge. And surprisingly, the inset coins of the period are still there too. But the real surprise was to look up and realize why the King’s Stone was so likely to have influenced Muybridge when it was put in its fancy new setting in 1850. From the stone there is a clear view of the upper windows, the domestic windows, of the Muggeridge property. He could see the stone from his family home. (The stone has been moved a little since 1850, but was outside the old Guildhall on a very similar spot).

Is Eadweard’s birthplace a museum, a National Trust, preserved in aspic view on this unique man’s origins? Not exactly. Crossing the High Street from the Stone takes you to a house that is actually significantly more handsome than its faded state and commercial use suggest. Downstairs, in Eadweard’s day, was the family coal merchant and corn chandlery. Handy for the Thames, running at the back of the property, it would have been  bustling, noisy and more than a little dirty. Now it’s a computer shop. Not a glossy chain store but one of those little places that rarely seem to have any customers, but somehow manage to hang on at the edge of the hi-tech revolution with a combination of bravado and individuality. 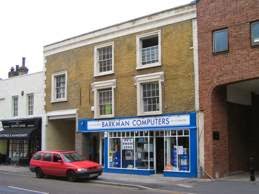 The upstairs, what would have been the family home, is now the offices of a business consultancy. Filing cabinets and a mix of modern and older office furniture sit in the Victorian spaces with the usual discomfort of a converted older building that hasn’t had a huge amount of money spent on it. But the biggest change is at the back.

Here, where the young Eadweard would have played among the coal heaps, where the Muggeridge yard would have stretched down to the ugly but practical banks of the suburban Thames, are now two mid-rise blocks of apartments, cutting off the house from the river, dividing the past from the present. I’m sure they’re meant to be stylish, but to me they just looked sad and out of place – but I was seeing them through Muybridge eyes.

And so to Liverpool Road, and Muybridge’s last home, from the place he was born to the place he died. I decided to walk and it proved quite a journey – if not quite a lifetime, the trek seemed to go on and on, through the town centre, then those scruffy streets that lurk on the edges, where everything is a bit run down, before appearing to leave Kingston entirely. At last, (long last) I was into classic leafy suburbs, the sort of streets where there’s never quite enough space for all the cars, and onto Liverpool Road itself. I’d got a blister by now and was feeling noticeably sorry for myself, so it’s no great surprise that I entered Liverpool Road and started to suspect that the solid villa Muybridge had lived out his life in was long gone.

For house after house there was a string of those 1930s brick non-entities that fill so many suburbs. The sort of houses that took just a touch of an architectural idea, but were never  brave enough to do anything with it. Some have a rounded porch. Others bay windows or a spot of half-timbering – but it’s always done so inoffensively that it has quite the opposite effect to the modern eye. There’s nothing wrong with these houses – I’ve lived in one. They’re comfortable and practical. But boring.

Now the house Muybridge died in is number 2, yet these houses had bigger numbers that grew rather than reducing as I walked along the road. And then it becomes obvious why. Suddenly I was in the real Liverpool Road with bigger houses, older, nothing fancy but much more effective. And there was number 2. Perhaps there was nothing else in Muybridge’s day – this was where the road started and the rest was what? A park? (Is it a coincidence that number 2 is called Park House?) No matter, I was there, the blister was worth it.

Now I have to confess I was very nervous at this point. It’s one thing to go into a shop or even knock on the door of a business and ask if you can take a look, but it’s another to walk up to the front door of a private house and ask them, as I hoped to, if there’s anything left of Muybridge’s time there. Do they ever, when digging the garden, I wonder, come across the remnants of his scale model of the American great lakes, the garden feature he was working on when he died? 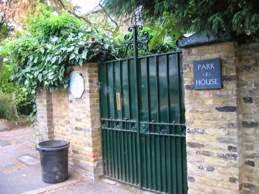 A deep breath and I approached. The house was almost hidden behind a wall and mature trees with a gate at each entrance – high, solid metal, green painted gates that you can’t peek through. High, solid, metal, green, locked gates. No way in. Okay, I thought, I’ll try the entryphone, ask for an audience. There wasn’t one. Even a prison has an entryphone, but 2, Liverpool Road was a blank, faceless, impenetrable mystery. I took some photographs, of the building and the couple of commemorative plaques on the wall. I stood a little longer.  But there was nothing left to do. Nothing but trudge back to the centre of town and the railway station.

There is a postscript to this. I couldn’t believe that the occupants of 2 Liverpool Road could have no interest in the fact that their home once housed a famous person. I wrote them a very nice letter, with a stamped addressed envelope enclosed. Asking for a little colour. Anything they could tell me. There was no reply. Is there anyone in there, or just cinematographic ghosts?
books history London photography research