Nothing to lament about here 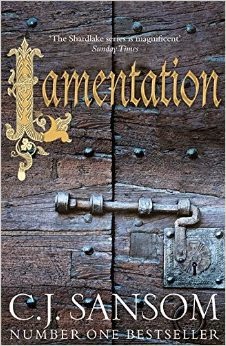 I'm not a great reader of historical fiction with the exception of titles where it overlaps with crime. Perhaps the greatest proponent of that crossover is C. J. Sansom, and his latest novel, Lamentation, featuring the hunchbacked lawyer Matthew Shardlake, operating in the complex times of Tudor England, is to my mind his best. Oddly, this is despite - or, rather, because - this isn't much of a crime novel. Instead what we have here is a full blown Tudor political thriller, with all the twists and turns, machinations and backstabbing (in this case sometimes literally) that you would expect in the modern equivalent.

The crime that Shardlake investigates appears simple. The disappearance of a compromising manuscript written by Henry VIII's last queen (on whom Shardlake has a long-term crush), Catherine Parr. But the setting, mixing the dangerous teetering between traditionalist, near-Catholic beliefs and 'reformer' protestant beliefs with the political manoeuvring that became ever more strong as Henry's death became obviously close is fascinating, engrossing and gripping.

I admit I'm probably the ideal reader of this book. I read a lot of crime, I like political thrillers, my favourite music is from this period and I find both the religious and political battles absorbing. All three of Henry's children, who haven't featured much in the previous Shardlake books, appear towards the end, and with the prescience of foreknowledge we can feel sorry for Edward, a shudder at what Mary will be responsible for, and hope for Elizabeth - directed by Sansom's expert light touches.

It's a long book at 642 pages, and this would usually put me off, but for once it is justified as there really is never a feeling that the author is padding things out. In reality, the book ends at page 619 with the rest taken up with historical notes - don't skip these as they fill in some details that you will probably find extremely enlightening. I certainly did.

So there we have it: gripping, historically impressive, yet never overloading the detail to the extent you feel that you are being educated, a page turner and yet thoughtful too. Wonderful.

Lamentation is available from Amazon.co.uk and Amazon.com.
Using these links earns us commission at no cost to you