How They Blew It 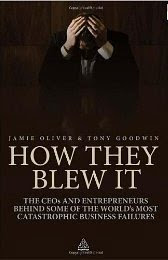 I occasionally get sent books that don't fit with www.popularscience.co.uk but are still interesting in their own right. How They Blew It by Jamie Oliver (no, not that Jamie Oliver) and Tony Goodwin is just such a book.

The premise is simple. It's a set of stories of how entrepreneurs and chief executives have lost vast sums of money for themselves or their companies (or both). There are some amazing stories in this collection, including the big names like Ken Lay, Dick Fuld and Jon Asgeir Johannesson, but also rather lesser known entrepreneurs and chief execs like Rueben Singh and Kevin Leach. Each of these key figures has nominally been worth a lot of money, and then made a huge mess of things.

Several of the people featured have been sent to jail. Two (Adolf Merckle and Christopher Foster) committed suicide. This is heavyweight stuff. Merckle is particularly fascinating psychologically in this respect as despite his big losses he was still worth several billion euros. He wasn't exactly poor - but couldn't stand the loss of face.

I was more than slightly surprised by the omission of Gerald Ratner, especially as none of the stories resemble what happened to him - but this is still an impressive collection. I'm sure you remember, but just in case, Ratner managed to wipe around £500m off the value of his business by disrespecting his customers and trashing his stock. He said, for instance, that they sold earrings for less than the price of a Marks and Spencer's prawn sandwich, and that were likely to be outlasted by the sandwich.

Of itself, the collection of stories is interesting, and encouraging for those who like to see others fall from a high place. But it also has significant value as a lesson  for business. Primarily the lesson seems to be about keeping your eye on the ball, understanding your business and market, and keeping the business clean, not tying it up in complex instruments. Being an entrepreneur is all about risk taking - but the stress here is on a calculated risk.

What is less stressed (though briefly mentioned) is the sheer luck involved in entrepreneurial success. This is too important a factor to be played down. A lot of these people (before their disaster) just happened to be the ones that statistically succeeded. Although the importance of luck is mentioned in the book's conclusions, the authors really don't understand this factor. So, for instance, they will comment that one individual clearly knew what he was doing because he predicted something on the stock market. No, he just happened to be lucky that day. As I write there is an octopus that has successfully predicted the outcome of every one of Germany's world cup games. That's the sort of expertise these people have.

Despite this error in understanding on the part of the authors, it's a fascinating collection of stories from life than any budding entrepreneur or would-be director of a large organization should read, if only to draw their own lessons. See at amazon.co.uk and amazon.com
Using these links earns us commission at no cost to you
books business review reviews