You can only go back to a foreign place 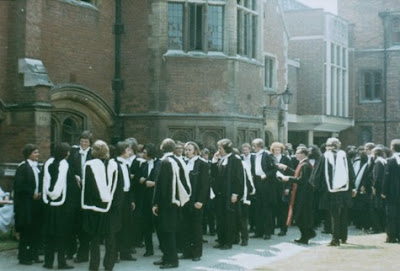 I know people who take every opportunity to go back to their school or university. They just love to revisit those hallowed halls. I'm afraid I don't get it. I've moved on. I've been there, done that, and now I'm doing something else. I don't want to be mired in the past.

Now there are some who would take a similiar viewpoint to mine because they had a horrible time at their place of education. But that's not my problem. I had a great time at school and an even better time at university. I loved it. But I don't want to go back. I have done so once, because a friend was desperate to, and twisted my arm to go to a school reunion. What a mistake.

First there was the tour, where we were guided round by a sixth former. He was very nice, but it was hard not to imagine him boggling that such old duffers were once at the school. Then there was a mediocre meal with a group of people most of whom I didn't know (the event was for several starting years, and even within my own year I probably only knew 20% back then, far fewer to be remembered now). Followed by speeches. Oh, joy. Speeches. I paid for this, and drove 3 hours to attend? Never again.

That same friend was in the habit of taking up his dining rights at college. In case you aren't familiar with the idea, a couple of times a year you can go and get a free meal alongside the fellows of your old college at high table. He loved it, but I don't know where to start on how horrendous this sounds to me. To begin with, though I ate in hall plenty of times as a student, the whole environment would be totally alien now, particularly from the senior combination room side (even those words worry me). But then there's the thought of eating a meal with a group of complete strangers who might expect some sort of intellectual conversation. Shudder.

This isn't the inverted snobbery of some Oxbridge graduates who wouldn't go back because they consider it elitist or something. I just would find the whole thing hugely cringe-making. Do people really enjoy putting themselves through such an ordeal? I'm afraid I don't understand it.
dining reunions school university