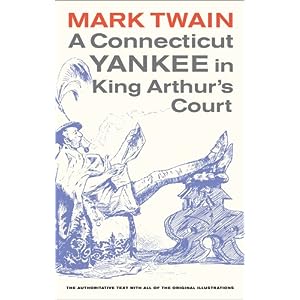 I've been reading around time travel quite a lot lately, and have just finished Mark Twain's A Connecticut Yankee in King Arthur's Court. It came as quite a surprise.

I'd read the usual suspects when it came to Mark Twain, but my memories of this time travelling tale mainly came from seeing the old 40s/50s movie on the TV as a boy and very much enjoying it. At least, I thought I did. While I remembered the time traveller's use of a handy solar eclipse he just happened to know about to save himself for death, most of the rest of my memories were false. This is because I'd conflated the film with Danny Kaye's superb medieval vehicle The Court Jester. So in my mind, Kaye was the time traveller, and the film featured the catch phrase 'Get it? Got it? Good!' and that wonderful tongue twisting schtick about the vessel with the pestle/the chalice from the palace and so on. In fact it was Bing Crosby in the real film, totally wiped from my memory by Kaye.

However, either way, the movie was a frothy confection of lightweight fun. Not so the book. Twain uses it to lecture us repeatedly on a number of his bugbears. He takes on slavery (still extant in the Southern US during the early part of his lifetime), supports the free market over protectionism, knocks down the whole business of someone being more important because of birthright - and perhaps most vitriolic of all, leads a frontal assault on the Catholic church. He's not anti-Christian, but wants to replace it with a wide range of non-Established protestant sects so the church can't do any harm.

There is humour - a fair amount of it. But there's also hanging, burning at the stake, slaves dying in chains,and in the apocalyptic finale, the hero with 53 helpers takes on and slaughters 25,000 knights, using dynamite, electric fences and Gatling guns. This is certainly no Once and Future King style 'right is better than might' - here it's 'high tech might is better than swords and armour might.'

There are few bits it's necessary to skip over, but mostly it's still highly readable, and a fascinating mix of story and social/political tract. If you haven't read it, dig out a copy - it's still in print. See at amazon.co.uk and amazon.com