Science as you've never heard it before in Birmingham 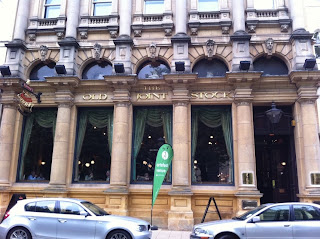 As I write, the British Science Festival (run by the organization formerly known as the BA) is still trundling along in Birmingham, ironically due to finish on 19 September, the day the Pope arrives in the city.

Last night I took part in one of the most unusual science/writing events I've ever attended. I was a judge, along with fellow writers Sue Guiney and Tania Hershman (the mastermind behind the event) of an open mic session for fiction and poetry inspired by science. It took place in this rather imposing building, The Old Joint Stock, a cavernous pub in the baroque railway station restaurant style. The venue houses a theatre, but we were in a rather cosier function room, tucked away on the first floor.

The judges were, to say the least, a little nervous. There had been no choice about the location, away from most of the Festival events, nor about operating without tickets (which gives no clue as to how many will turn up). In the end, a small but very interesting group joined us - enough to run the competition, with further particpants and audience straggling in over the next two hours. (Students, eh?)

Each of the judges read a little bit of their work (I was the joker in the pack, as the only non-fiction writer), then it was over to the competitors. I really had no idea what to expect. As it happened, the results were diverse and fascinating - genuinely good fun. Diversity was lacking in form - it was all poetry - but we had everything from a love poem cleverly based on the nature of quarks (the particles that make up protons and neutrons, whose attractive force gets stronger as they are separated) to a short epic (if that isn't an oxymoron) on the celebrated pioneer forensic pathologist Sir Bernard Spilsbury, from a sophisticated poem describing the impact of an atomic bomb as 'flash photography' to a delightful piece for children about the moon, which would work very well as the text for a children's book. 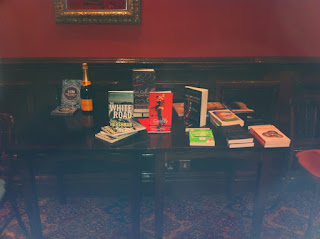 Prizes were duly awarded (from the table shown), a few of our books sold and a good time was had by all. General agreement was it a real success and ought to be done again. Only next time, you'll be there, I hope.
books fiction poetry science talks