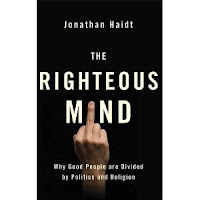 Political parties are anything but scientific (and let's face it, many politicians are totally ignorant about science). In one way, at least, it's rather good that they are so scientifically naive. If they weren't they could be even more devious.

I'm reflecting on some remarkable information in an equally remarkable book, Jonathan Haidt's The Righteous Mind (take a look at my enthusiastic review of it). In one of those lovely bits of research that psychologists delight in doing, a group at Princeton discovered that when people were shown pairs of photos of candidates for various political roles (the participants did not know the people, or what party they stood for) and were asked to assess which was the more competent of the two, around two thirds of the time they picked the person who actually won the political contest.

It wasn't that they were always picking the most attractive person - snap judgements of attractiveness did not predict victory so well. They were picking the person who looked most likely to do a good job. And the amazing thing is that they could do this in one tenth of a second.

That's it. Forget all your campaigning and policies and goodness knows what. Pick the more competent looking candidate, get their image widely seen, and you're there (two thirds of the time). I can only assume from the look of many of our politicians that they are not currently chosen this way. But how long will it be...?