Sidney Chambers and the Perils of the Night - review 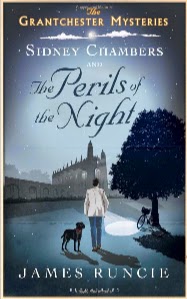 I love detective fiction, but I'm very parochial about it - I'm only interested if it's English. Even Scottish is too alien. At the moment most of the big names in the field are silent, so it was interesting to discover on Waterstones' BOGOHP table this book by James Runcie.

I think it's fair to say I give it a mixed reception. I love that it's set in Cambridge and Grantchester, and unlike Colin Dexter's Morse books with its fake Oxford colleges, Runcie has chosen to use actual settings. It is much more satisfying to have real locations that you know and love. The period setting is reasonably well done - it is placed in the late 50s and early 60s, and there's none of the all too common tendency to give period characters modern views. These are very much people of their time. In fact the main character is almost too reserved for his own good.

On the downside, I find the situation a little far-fetched. The main character is the vicar of Grantchester who seems to spend most of his time helping the local police as an amateur sleuth. It's all a bit slow and leisurely. And there's an interminable section describing a cricket match that is deadly dull if you aren't interested in sport*. Oh, and there's a section where the crime involves a physicist and the physics as described is anachronistic, combining an enthusiasm for the basics of quantum theory that would be more appropriate for the 1930s with a mention of dark matter as if it were commonly discussed back then. Admittedly Zwicky mentioned the possibility of dark matter in the 1930s, but no one would refer to it as if were a commonplace in the 1950s and 60s. Oh, and I can't stand the Harry Potter-style naming convention of the books.

Even so, I enjoyed the gentle, slow pace. As one of the puff comments remarks it is 'perfect company in bed' - not challenging and decidedly cosy and nostalgic. I even quite enjoyed the rather unlikely timing of the main character's visit to East Germany that happened to coincide with the Berlin wall going up. This isn't going to be a book that appeals to someone who wants fast paced, modern dynamism, but if you enjoy a little period gentility with around four different crimes packed into the same volume, it's worth a try. There are three books available in the series. See more at Amazon.co.uk and Amazon.com.
Using these links earns us commission at no cost to you