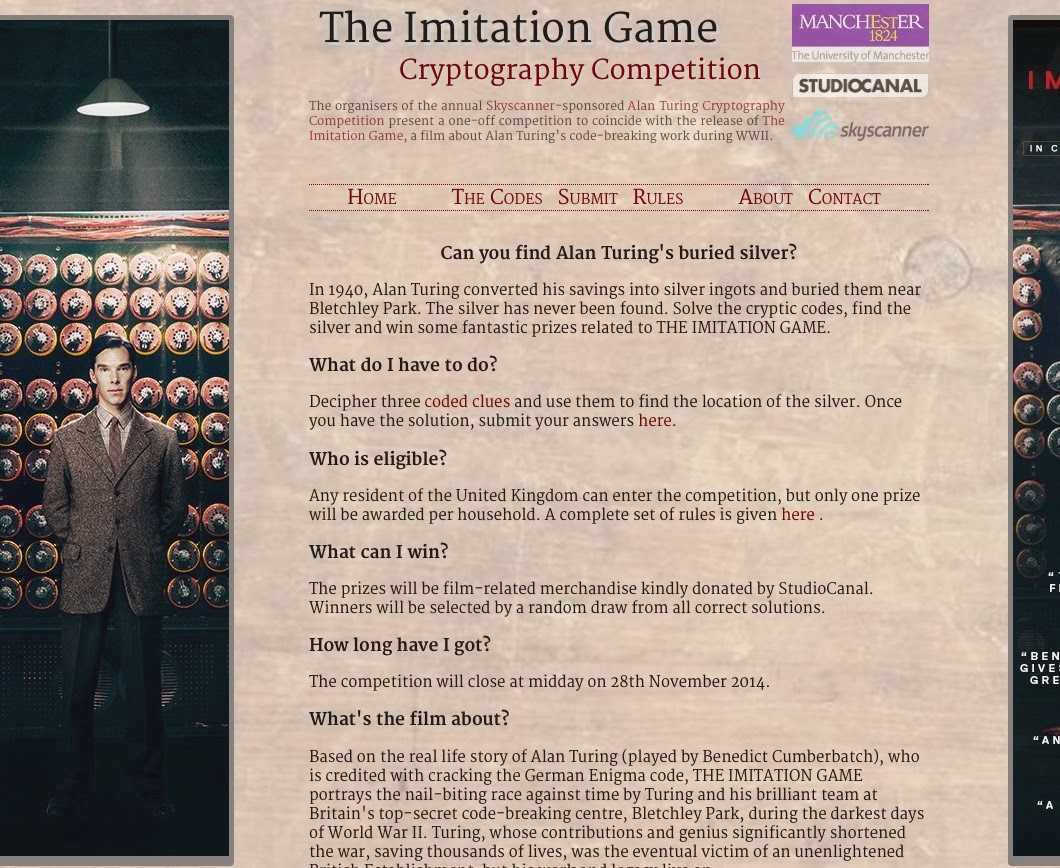 I'm not a great one for putting out press releases as blog posts, but this is one I can't resist sharing. So let me hand you over to the University of Manchester's press office to discover the opportunity to crack a cryptic code and win some movie goodies in honour of Alan Turing (and, yes, the new film with Mr Cumberbatch about him). Luckily, the treasure hunt won't  turn out like the infamous Masquerade book, which gave cryptic clues to the burial place of a solid gold hare, and resulted in all manner of places being dug up to the irritation of their owners and embarrassment of the publishers. Here the treasure isn't really buried (and, sadly, isn't real silver ingots as Turing is supposed to have hidden).

So, over to you Manchester U:

A new fiendishly-challenging online brain-teaser, featuring cryptic clues, has been launched by mathematicians at The University of Manchester.  The online cryptography competition has been designed to coincide with the launch of the film ‘The Imitation Game’, which tells the real-life story of mathematician Alan Turing, who is credited with cracking the German Enigma Code.

The cryptic conundrum is based around a true story of how in 1940, Alan Turing converted his savings into silver ingots and buried them in Bletchley Park. In real life the silver has never been found, but for the purposes of the competition, a location has been chosen and three coded clues are there to be deciphered.  The answers to the clues can then be used to find the location of the silver.  Participants submit their solution and winners, who will be drawn at random from correct solutions, receive film-related merchandise kindly donated by StudioCanal, distributors of the film.

Turning, who was a pioneer of computing, artificial intelligence and mathematical biology had close links with the University of Manchester.  In 1948 he was appointed Reader in the Mathematics Department and soon afterwards he became Deputy Director of the Computing Laboratory at the University, working on software for one of the earliest true computers - the Manchester Ferranti Mark 1.  Actor Benedict Cumberbatch, who plays Turing in the film, also has ties to the city and The University, where he was a former drama student.

Dr Andrew Hazel from the School of Mathematics said, “Having seen our annual online Alan Turing Cryptography Competition, StudioCanal contacted us to propose a one-off competition related to the release of The Imitation Game. We were delighted to take the opportunity to share our enthusiasm for mathematics and cryptography, and to highlight the close ties between the University, Alan Turing and Benedict Cumberbatch.”

The Imitation Game Cryptography Competition will close at midday on 28th November 2014.  It is free to enter and open to any resident of the United Kingdom but only one prize will be awarded per household.  Full details available online.