You get what you pay for in publishing 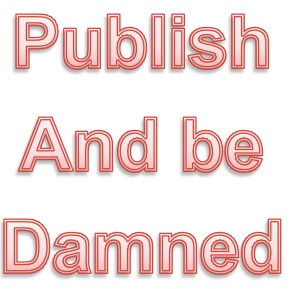 The publishing world is very different now to the way it was 20 years ago. Some of us still work with traditional publishers. We appreciate the professional services they offer, from editing and typesetting to getting our books into bookshops. Others choose to do it themselves with mixed results - the best self-published authors do superbly well others sell to their aunty and that's about it. But there's an interesting in-between scenario.

What if you want your book professionally produced, but it's rejected by traditional publishers? It might seem there's an ideal alternative in companies that do the work the traditional publisher does, but  will accept pretty well any manuscript as long you are prepared to defray costs. This kind of operation has been going a long time, and is traditionally described as 'vanity publishing'. In principle there's nothing wrong with it - but a recent experience I've had with just such a publisher (I won't name them as there are plenty of their ilk) shows the dangers for the author.

We'll leave aside the price that authors face - these are typically too high for the services offered, but I'm sure there are some competitively priced vanity publishers out there. It's more about what the author expects to get for their money.

What started this was receiving a press release from a vanity publisher. I had no illusions about what they were, and treated it as I would a self-published book. 99 times out of 100 I ignore these. But this real world fantasy with a historical twist sounded quite intriguing, so I thought I'd give it a go. The book arrived, and you could see that the author had got some serious work done for his or her money:

All in all, not bad. Of course it's unlikely it would ever be in a bookshop, but with Amazon etc. this isn't strictly necessary. But then I started to read the book. I tried. I really did. But it was practically unreadable. Poor use of English, badly structured... it was well produced, but a very bad book. I pointed this out to the publicist, to be told that some authors are trickier to deal with than others.

Okay, I should have left it there. But I was then offered something more down my usual line - a popular maths book, written by someone who had a background that made it possible that it could be a decent text, and on a subject I find really interesting. So I thought I'd give them another go.

Again, the presentation was excellent. This was a chunky hardback produced to excellent quality - it could easily have been from one of the big publishers. And again it had clearly been proof read. There was even a lot of worthwhile content. But it was a book that was crying out for a proper edit. The text wandered here and there, had stylistic issues and, most worryingly for a popular science book, repeatedly made reference to concepts and people it had yet to introduce, so unless you already knew the subject it was baffling.

This was by no means a total disaster, so I wrote a review on popularscience.co.uk concluding: 'Overall, then, the idea behind the book is excellent and there is sometimes some rather poetic, readable material, but there is a total lack of understanding narrative flow - the writing jumps around without consideration for what the reader already knows - and the whole is in need of a serious edit. The book is handsomely produced, but from a publisher that only seems to do copy editing without any true editorial input, and it shows. I can't really recommend the book unless you like a challenge, but that's a pity because there is good material in it.'

I thought the publicist would think any publicity is good publicity, but instead got a hurt email saying

Thank you, but the bad aspects of your review outweigh the good so I would have preferred it if you had warned me that you found the book poor as I would have asked you not to put it up on your site.

I hope the author will appreciate your review.

Taking that final remark as a veiled threat, I took the review down. I won't be taking books from them again. But this sorry debacle left me with two thoughts. First, what did they expect, putting out a book that clearly hadn't been edited? A glowing review? And secondly, and more importantly, what do the authors expect? Did they think their books had been edited, just because they had been proof read? Were they like those X-factor contestants who blithely believe in their own talent, despite all the evidence to the contrary, or did they think that by going to an apparently respectable publisher that their handsome looking books would have been turned their book into something more than they originally wrote?

I have been writing books for a long time, but I still get editor's notes and make changes to the first draft. I'm just doing such an edit right now, and, for instance, the editor suggested a change to the end of the book that I think has improved it immensely. Yet these people have missed out on this essential part of working with a publisher - something needed far more with a new writer.

You do indeed get no more than what you pay for with a vanity publisher (and in some cases considerably less) - but would-be authors who are thinking of using their services should check exactly what is on offer, and whether it will indeed make their book saleable.