What is light, REALLY? 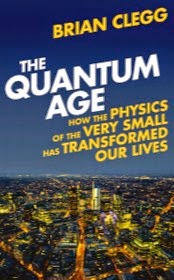 Every now and then someone sends me an interesting question about science, and, while I can't guarantee to answer it, I do my best. I got one yesterday that said 'if light can be considered traveling in packets, what is between those packets? Does anything exist (in the space) at the end of one photon and the beginning of the next photon?' And this a particularly engaging question, not so much for the answer, which is pretty straightforward, but for the implications it has for the way we talk about physics.

The answer, to get it out of the way, is nothing. There is nothing (in terms of the light itself) in between photons or between the 'end of one photon and the beginning of the next' - apart from anything else, photons don't really have 'ends'. A beam of light can be described as a set of discontinuous particles we call photons and there is no more something between them, linking them, than there is amongst a stream of electrons. Yet that's where the story gets interesting.

Part of the problem, I think, is that word 'packet'. We tend to use it when talking about the early development of quantum theory as it reflects the terminology used at the time. But it does give a highly misleading impression that a photon is a traveling 'packet' of light waves, rather than a particle like an electron. It's true that, before measurement a quantum particle doesn't have a location, but is instead a spread out probability wave describing the chances of finding it in any particular place, but that is in no sense a wave in the same sense that classically we would have imagined a beam of light as a set of continuous actual waves in the ether, nor does it make a photon a spread-out wave packet.

The other thing that is misleading is that eminent scientists tend to say things about light and other quantum phenomena that arguably isn't really what they mean, but is said at a kind of meta-level that they take to mean one thing, but the world can interpret rather too literally.

A classic example was Richard Feynman's comment about light in his book QED. He said:


I want to emphasize that light comes in this form – particles. It is very important to know that light behaves like particles, especially for those of you who have gone to school, where you were probably told something about light behaving like waves. I’m telling you the way it does behave – like particles.

Before I comment on that, let me give you a quote from another Nobel Prize winning physicist, Steven Weinberg who wrote (about ten years before Feynman's book came out):


[T]he inhabitants of the universe [are] conceived to be a set of fields – an electron field, a proton field, an electromagnetic field – and particles [are] reduced to mere epiphenomena.

It would seem that each was telling us what light (encompassed in Weinberg's more general remark) is. But they weren't. Each was making a point, emphasising that a conception of light familiar to their audience wasn't the only way of looking at. Feynman was saying 'you've been told light is a wave, but I can explain all its behaviour using (very special) particles.' Weinberg was saying 'particles aren't really necessary, you can describe what's going on just using fields.' But I don't think Feynman believed that light is a stream of particles, or that Weinberg believes that light is a variation in a field.

Here's the really gut-wrenching thing. We can't know the truth about light. We don't know what it 'really' is and we never will. We just have various models of light that can be useful to predict its behaviour. For basic use - say for producing everyday optics - the old classical idea of a continuous wave propagating through space works fine, and it's simple to use. Once we introduce quantum effects, and the interaction between light and matter, Feynman's elegant diagrams and a particle model work well (bearing in mind these are peculiar particles with phase and a tendency to take every possible path between origin and destination, not bullet-like, straight line particles). And for most modern physics, a field approach is most effective.

However, none of these - not waves, not quantum particles, not quantum fields - is what light is. They are all models, ways we use to build a toy version of reality and see how well it reflects the real thing. Light is light. It does what light does. Those models help us predict what light will do. And that's the limit of science. It is immensely valuable. It allows to make all sorts of interesting hypotheses derived from those models, and to develop all sorts of wonderful technology. But it is not the 'truth' about reality, a clear window on the workings of the universe. As St Paul put it, we see through a glass darkly (i.e. as they saw things in the poor mirrors of the day). As humans we are all model builders, making mental constructs to get a handle on the world around us, but scientists do this in a particularly precise, beautiful and robust way. Something to celebrate indeed. But don't expect them to have superhuman powers.

You can find out more about this fun quantum stuff - and the way it has been used to make remarkable technology - in my book The Quantum Age.