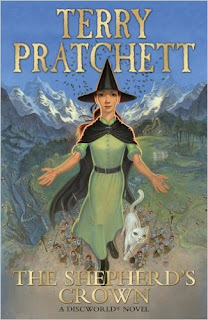 There has been considerable negative reaction to an article by someone I've never heard of called Jonathan Jones in The Guardian who tells us to 'Get real,' because 'Terry Pratchett is not a literary genius.' Jones goes on to say 'I have never read a single one of his books and I never plan to.' Why? Because 'life is too short to waste on ordinary potboilers - and our obsession with mediocre writers is a very disturbing cultural phenomenon.'

Some have suggested that Jones is indulging in the popular Katie Hopkins method of trying to become famous by irritating people. (If so, it hasn't really worked as it's just his bile and not his person that has reached public awareness.) But I don't think they are right. Instead what we have here is classic literary fiction jealousy of popular fiction.

The attitude is wondrously condescending and amounts to 'Only the fiction I like is worth reading, because it changes lives and enriches the soul whereas your rubbish just entertains the masses.' I'm sorry, I very rarely resort to offensive language, but this is bollocks. There's plenty of literary fiction that is, frankly, boring, unreadable self-promoting trash. It's showing off that is being passed off as art.

All written work (and art for that matter) is communication. If the work fails to communicate to the reader, it is more the fault of the author than the reader, unless what's getting in the way is changing language. The only thing that stops Shakespeare being instantly accessible is they way that language has changed considerably, but if you can overcome that, you don't have to work at getting Shakespeare - it gets you. Viscerally. But I suspect most of the authors Jones would champion with the obvious exception of Jane Austen (and unlike him, I have read some of the authors in question) present quite the reverse picture. They are poor communicators who are more interested in an artistic turn of phrase and piling on the painstakingly implausible angst than linking to the reader.

In one sense Jones is right. Pratchett wasn't a genius. His writing style is closer to P. G. Wodehouse than Shakespeare. But as well as Shakespeare and Austen, give me Pratchett (or Wodehouse, or Bradbury, another author Jones attacks) any day over the pretentious twaddle that Jones no doubt considers literary genius. Because writers like Pratchett and Bradbury knew their craft. They knew how to draw in a reader and get into their minds. And they have influenced and enriched far more lives than Jones' literary elite ever could.
books elitism literary fiction twits writing