The Gospel of Loki review 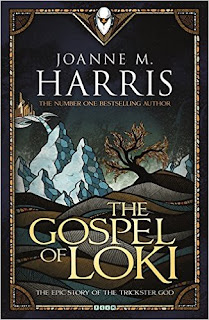 One of the best things about speaking at the recent Manx Litfest (of which more soon) was attending some of the other author events, including one by Joanne Harris, talking about her new book The Gospel of Loki.

This is a beautifully conceived bit of fantasy writing. The idea is that we already have the 'authorised version' of the history of the Norse gods, as provided primarily by Odin in the form of the familiar Norse myths, but inevitably they are biased to Odin's viewpoint. This book is the version according to Loki, traditionally the bad guy in the myths. Of course, Loki is an inveterate liar and trickster, so it's essential to take his words with a pinch of salt, but they are all the more entertaining because of this.

Harris sets out to get under the skin of this archetypal villain, to see why he might have acted the way the myths have him behave. Apparently some fans (particularly US fans of the comic book version) have complained because it's 'not canon' - but for me this is the delight and appeal of this book, especially because Loki has a very modern way of expressing himself.

Although I was vaguely aware of the Norse myths, I had no idea until I read The Gospel how much Roger Zelazny was clearly inspired by the Norse material for his classic Amber series - not in an explicit way, but strongly coming through in the two power centres of Order (Amber) and Chaos, with the shadow worlds in between, and in the way that the ruling houses act in so many details.

Having said that, there's plenty that's original in the Amber books, and if you've never read them, I strongly recommend getting hold of a copy of them too. In fact, I can't help but wonder if Harris was slightly inspired by them herself, because Zelazny also makes full use of the opportunities to contrast a modern world first person narrator's viewpoint with the more ancient feeling universes, including the narrator's experience of being imprisoned and blinded.

So, a big recommendation for Joanne Harris's new book. It proved quite a pleasant shock to me, as (and I suspect this may be the case with most people) I only associated her with her best-known novel Chocolat, but this is a very different, earthy and delightful style. The Gospel of Loki is available on Amazon.co.uk and Amazon.com. It's also well worth taking at look at The Great Book of Amber on Amazon.co.uk and Amazon.com.
Using these links earns us commission at no cost to you