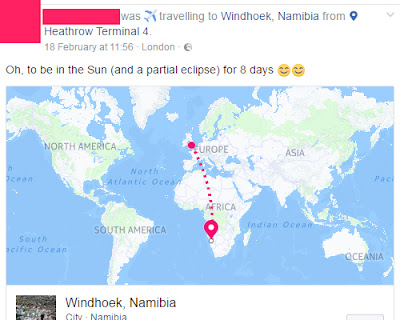 A lot of my friends on social media are academics - mostly scientists - and it sometimes seem they spend more time jetting around the world to conferences or other events than they do in the lecture theatre or undertaking research. I find this odd, as they are, on the whole, also the kind of people who are concerned about the environment. Of course, they will always come up with justifications for these jaunts, but do those excuses really stack up?

As far as I can there are broadly five reasons for flying off to distant parts:


Let's see how each of these stacks up as justification for the massive carbon footprint that goes with being a jet-setting academic.

Attending lectures - Oh, come on. I attended conferences in my youth. You'll get one or two good talks and the rest will be dreary drones where the incompetent speaker reads his or her ludicrously over-crowded Powerpoint slides. Badly. Ridiculously easy to replace with videos/shared Powerpoints.

Poster sessions - I must admit, these didn't really exist to the same extent when I went to conferences, but I have been to a couple, and again, a virtual online poster session could work much better. You could be guaranteed to have interaction with the poster owner via an online conversation, when at the event you often can't get to the popular people to speak to them.

Networking with other academics - For me, this is probably the only justified reason for conferences. Online networking is definitely second-best. However, given environmental concerns, I'd say this is not a good enough reason for all that flying. I network with authors around the world, some of whom I've never met in the flesh, very effectively online. And when we do get a chance to meet up, because someone's in another country anyway, it's a great bonus. There's no reason why academics can't do the same.

Undertaking onsite research - This may seem to be the one there's no getting around. Except it's perfectly possible to do so. Remember, we are undertaking research on Mars without scientists taking trips there. But that's an unfair example. In some cases remote technology is well-established already. Most astronomy observations are remote these days. Is there really any need to to travel to see (say) a partial eclipse? (See illustration - incidentally, I'm not singling out this individual, it's just the first Facebook post of an academic trip I came across.) In other cases like the archaeology dig or the marine biology you probably do need a human doing the job - but why not let local academics collect the data and work with it remotely? Unless, of course, you hold the view that local academics are not up to your standards - which seems rather worrying. (Of course you could always move to a local university yourself - one-off travel is less of an issue.)

Have I oversimplified things? Certainly. There will always be good reasons for some academic travel. Nonetheless, the majority of current travel is arguably unnecessary and I suspect that most academics don't give enough consideration to the environment when making their travel plans.

This has been a Green Heretic production.
academics environment flying green heretic hypocrisy