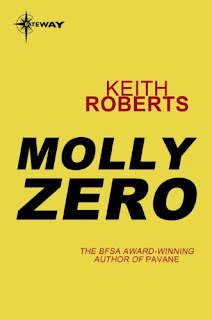 Revisiting some of the SF favourites from my youth, I've just read Molly Zero by Keith Roberts. This came from the second phase of Roberts' career. He started out with sub-Wyndham SF disaster novels like his The Furies featuring physically impossible giant wasps, but then wowed the literary world with his bucolic alternative history novel, Pavane, set in a modern day Britain where technology was held back to the steam level by a controlling Catholic church.

Molly Zero also feels like an alternative history novel, though it isn't. We meet the eponymous schoolgirl heroine being sent by train from the 'Blocks', where she was brought up, to another location. This could easily have just been another Brave New World derivative, but it's far more. My 1970s copy has a huge plot spoiler in its blurb (as does at least one of the Amazon pages) - I'm not going to do that, but I am about to discuss its main theme.

This book proved a particularly appropriate re-read in 2017 as, despite being a very readable adventure story, it is a fascinating study of a society that decides to withdraw from globalism. What seems at first a straightforward dystopia is, in fact, the playing out of the idea that globalism inevitably leads to rampant consumerism and eventually the attempt of governments or corporations to build empires - which then leads to mass slaughter and untold horrors. In response, British society is cut off from the world and managed by an elite. Molly experiences a number of different versions of isolationism, and though we may dislike them, we are challenged to think what really is the best approach.

So far, so brilliant. There are a few issues, though. Roberts takes the brave decision to write in the second person - so Molly is referred to throughout as 'you'. The idea of this style is to immerse the reader, but I find it really grates on me - though, to be fair, by about 50 pages in I was noticing it less. Some of the situations Molly find herself in feel rather stereotyped (though arguably they are designed to be so by the elite). I think Roberts struggled with Molly's sexuality in a way that wouldn't be an issue for a modern writer. And the ending is odd. I really can't decide whether it's terrible or very clever.

While probably not the equal of Pavane, this is a really interesting and thought-provoking book that manages never to let the message overwhelm the narrative. I'm very glad to have revisited it.

Molly Zero is available from amazon.co.uk and amazon.com
Using these links earns us commission at no cost to you
book review books reviews science fiction