My musical battle with Alexa 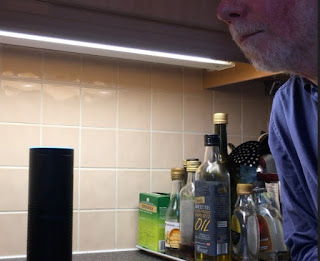 I've had a couple of Amazon Echoes in the house for a while now. I will review these remarkable voice-activated devices fully in a while, but I just wanted to share an experience that shows we're still quite a way from being able to interact freely by voice with a computer.

It's widely acknowledged that Alexa, Amazon's equivalent of Siri, has some syntax limitations. It occasionally takes two or three tries to get it to do what you want, as it's nowhere near as flexible as humans in understanding the different ways to ask for the same thing. But this example involved a very simple command that is meat and drink to Alexa - playing a piece of music.

Usually, Alexa is great for this. I have the option that allows me to dip into Amazon's 50 million plus database of tunes. So to pull up, say, the latest Ed Sheeran, is the work of moments. I can even ask for something as obscure as one of Rick Wakeman's less popular prog rock albums. (Mmm, The Myths and Legends of King Arthur! Kitsch or what?) However, stray into classical music and things can get a little more tricky.

One of the problems, is the tendency when naming a track by a popular beat combo to say 'by' where what is meant is the performer, not the composer. But worse still are the issues when the composer dares to give the music a foreign name.

For your amusement, I have put together a little video of my attempts to get Alexa to play Schoenberg's Verklärte Nacht. Incidentally, this isn't me trying to be difficult. One of the joys of having this kind of music library available is that you can pull up something on a whim. I was cleaning the kitchen and remembered, out of the blue, hearing a bit of Verklärte Nacht once and thinking 'Mmm, I like that.' So with Amazon's vast library at my fingertips I asked for it. Once or twice. And then a few more times. (The video is a recreation.)

Incidentally, if you think I'm cheating and asking for something that isn't in the library, so Alexa will get confused easily, it is there. I used old fashion web technology to look it up and put it in a playlist with a name Alexa would understand, and it played fine. And in case you feel the urge to complain, as I say on the video, I know that Verklärte Nacht is not from Schoenberg's twelve tone period. That was intended to ironically flag up that Alexa didn't understand Schoenberg - but even humans sometimes can misinterpret a spoken command.

Take a look at my musical battle with Alexa: