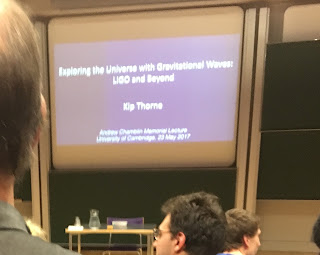 This is primarily a thank-you to the organisers of the annual Andrew Chamblin Memorial Lecture in Cambridge. I attended yesterday courtesy of the Department of Applied Mathematics and Theoretical Physics, and it was fascinating to hear Kip Thorne, until recently Feynman Professor of Physics at Cal Tech, give an insider view on the development of gravity wave astronomy and the LIGO observatory.

The lecture was packed - in fact, it appeared to be relayed into other lecture theatres by video link - with an audience that would have given a brilliant score in the I-Spy Book of Physicists (had such a book existed). Thorne began by asking how many in the audience had physics degrees, doctorates and beyond - it was a distinct majority in the main room, but he then made it clear he was addressing his talk primarily to the non-technical remainder, and managed to do so very effectively.

What was particularly interesting from my viewpoint was the speaker's ability to balance the scientific content with the political, organisational and personal aspects of getting a project of this size off the ground. I won't relay lots of detail here, but one very effective story brought out the scale of the problem facing those building the LIGO detector. Thorne pointed out that in a book on gravitation he had said that a LIGO-style detector was 'not promising'. This was because of the scale of the movement of a mirror that has to be detected to 'see' a gravitational wave. Thorne built this up impressively:

If you begin with 1 centimetre and divide by: 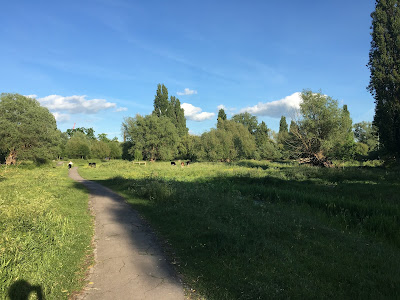 It was a surprisingly exhausting day, making a 9 hour round trip for just over an hour's lecture - but well worth it.

And that round trip did include a walk back to the station across one of the more remarkable parts of (pretty much) central Cambridge, pictured here - a relaxing end to the day.
Cambridge gravitational waves lectures physics