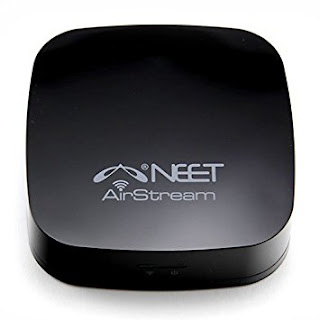 For some time I've been using an Apple Airport Express to relay music from my computer to another room to plug into an old fashioned sound system that hasn't heard of Wifi. The setup works well, but it's overkill as the Aiport is a fairly expensive piece of kit that can do far more.

I needed to redeploy the Airport Express for a more heavy duty use, so I looked for a good, low priced alternative to do the job - and settled on the Neet Airstream. It's a little black puck, squarish with rounded corners. It feels fairly lightweight, but seems reasonably well made. The setup process was not brilliantly described in the manual, but is reasonably straightforward, and once it was up and running it simply appeared as an AirPlay device available to computers or phones via the Wifi. The sound seems fine - I'm very happy.

There are a couple of small niggles. The biggest one is that it doesn't come with a power supply. It assumes that there is either a USB outlet on your sound system (there isn't on mine) or that you provide your own power supply. Luckily, most people have the odd spare phone power supply with a USB socket and an old Apple one worked fine.

The second issue was that setup. First you sign a phone or computer into the device's own Wifi, then connect the Airstream into your Wifi network. This can be done either by downloading an app to your phone, or (as I did) by simply typing in the device's address to a browser, after which a click of the appropriate button allows you to log it into your Wifi. It reboots and job done. The only reason it seems more difficult than it is, is because the manual describes this process as 'bridging to the internet', which feels like it's trying to do something completely different. If it had said 'add to your Wifi network' or similar, there would be no confusion.

Overall, though, does the job nicely at a good price.