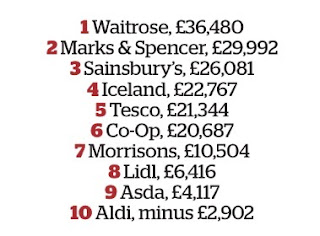 All too often we see a story in the newspaper where numbers are painfully parroted without giving any consideration to what they actually mean - and all too often that means we need recite our favourite mantra, 'correlation is not causality'.

Today's paper carried a wonderful example of this, citing 'research' by Lloyds Bank showing that living in the vicinity of a supermarket will have a varying impact on the price of your house 'depending on the status of the shop.'

As we all know, it shows nothing of the kind. There may be a correlation between being near the shop and house prices - but it's highly unlikely it's causal. The reason we can be reasonably sure of this is that occupant of the number 4 position, Iceland. Anyone who knows their 'status of the shop' rankings knows that Iceland is the pits - certainly below Asda. I don't doubt the pulling power of Waitrose, but the fact is I'd suggest there are other causal factors at play here.

Why would Iceland score higher than the Tesco to Asda set? I'd suggest because these lower rated shops are more likely to be located in the suburbs, where Iceland is more likely to be in a town/city location with higher property prices. Of course I don't know that this is true - it would take a lot more work that I (or Lloyds, I suspect) am prepared to put into it. But I think a third factor, such as location, is far more likely to have produced the Iceland oddity than status. (Location could also impact quite strongly on, for example, M&S.)

News media - I'm not asking you to go into detailed statistical analyses (though that would be nice) - but please think about whether a story is about correlation or causality before you tell us that X causes Y. You wouldn't publish a story with a total guess of who won the FA Cup Final - don't give us guesswork causes hidden behind numbers.