Can you discover the periodic table? 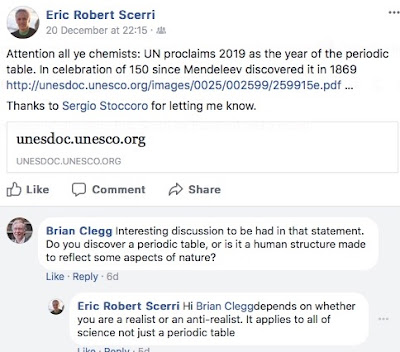 In it, Eric uses the verb 'discovered' for what Mendeleev did with periodic table. When I queried this, he suggested that the use of the term depended on whether or not you are a realist. But I'm not sure if that's true.

Let's take a simpler example, then come back to the periodic table. Specifically, we'll use the star Betelgeuse, the distinctly red one of the four main stars of Orion.

If I'm a realist*, then I think there is something real out there that I am labelling Betelgeuse. In good Kantian fashion, I can't know the reality - the 'Ding and sich' - but I can report on the sensory data from Betelgeuse and believe that I am talking about something that really exists. As it exists independent of humanity, we can discover it. However, Betelgeuse is also a class M star on the endearingly random looking stellar classification system that goes from O to B, A, F, G, K, and M. This system is not part of the reality that is Betelgeuse, it is a classification system that people devised - it's a representation of something - a different class of thing to a star. As such, the classification system cannot be discovered: it has to be invented or created by human beings.

If I am a non-realist, who presumably doesn't thing there is a defined reality behind the label Betelgeuse, this has no effect on the constructed classification system, which is still invented or created.

Let's now shift that picture to Mendelev and the periodic table. As a realist I can accept that there are relationships between different atoms based on their atomic weights and properties - that is something that can be discovered. But like the stellar classification system, I would suggest that a periodic table is a representation, a model, not an aspect of reality. As such, even as a realist, I would suggest it can only be created or devised, not discovered.

UPDATED - Eric has kindly replied - his response is below. I still respectfully disagree - not that there isn't some inherent structure reflecting atomic structure, but just that the concept of a two dimensional table on a piece of paper is just not a natural object - it's an artificial human model, based on the available data - and as such I don't believe it can be 'discovered'. I perhaps confused the issue by bringing in the stellar classification system, which I only intended as a simpler example to start with, but seems to have got in the way of the point!

Eric Scerri: You raise a very interesting question.  However I want to respectfully disagree with you since I think that the two cases you compare are not analogous in the way that you claim they might be.

In the case of the periodic table there is no continuity between each of the elements.  What I mean is that there are no intermediate elements with fractional atomic numbers.  The elements are strictly discrete a feature was in a sense a foreshadowing of the discovery of the discreteness of quantum mechanics.  Not surprisingly the periodic table is broadly speaking explained by quantum mechanics, which it helped in getting started in the first place (Bohr, Pauli etc.).

In the case of the Russell-Hertzprung diagram one is dealing with a continuum of possibilities, an infinite number of intermediate cases.

Returning to the periodic table, we now understand why an element falls into a particular group and shows similarities with several other elements.  It’s because they share the same number of valence electrons.  Of course electronic configuration does not cause chemical behavior in any strong sense of causation and it is more of a correlation between number of outer electrons and chemical behavior.  The deeper ‘cause’ is understood by appealing to the Schrödinger equation for any particular atom which captures the dynamics of the atom in addition than the mere number of outer electrons.

Correct me if I am wrong, but there are no counterparts to either such features in the case of the classification of stars.

In the case of the R-H diagram we have an example of an artificial system of classification.  There is nothing intrinsic in the stars that allows us to demarcate between one classification label and another.  Stars could have been classified otherwise, and so it’s not a ‘natural system’.  To take a more extreme example, the Dewey Decimal system of book classification is also artificial.  It is we who decide how books in the various disciplines should be subdivided and ordered.

In the case of the periodic table nature is being carved at the joints to use a favorite phrase among realists.  The ordering principle of atomic number is given to us by nature.  It is not imposed artificially.
chemistry periodic table philosophy of science realism