Review - A Murder for Christmas 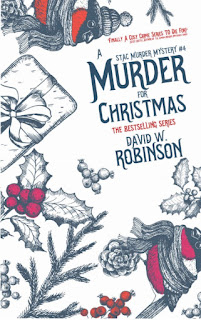 I finish my murderous Christmas roundup with a solid but unimaginative performer.

I was wary of reading this as it's part of a long series featuring the 'Sanford Third Age Club', in this case on their Christmas jaunt to a hotel in Leeds, which all sounds a bit twee and forced. But in some ways it was better than my expectations.

Let's get the negatives out of the way first. The characters tend to have one or two simple characteristics that drive their behaviour. So, for example, our amateur detective and chairman of the Club, Joe Murray is obsessed with not spending money (he is a Yorkshireman after all) and is very observant. The writing style is workmanlike, but in some places the author forgets 'show, don't tell.' The police are pretty hopeless, apart from anything else in not arresting our amateur at the end after he withholds evidence for a day that he knows has been handled by the killer, loses part of it and handles all the rest repeatedly (admittedly with gloves). And the denouement, where in Agatha Christie style everyone but the dog is accused one after the other, drags on for far too long.

On the other hand, there are some interesting aspects to the plot, putting all involved in a hotel over Christmas, makes for good atmospherics and it genuinely is quite difficult to spot how the clues are going to be used to come to the satisfactory conclusion. What's more, the setting provides some nice observation of the second rate entertainment likely to be encountered on this kind of break. Oh, and there's only one murder - far too many detective mysteries have to have a string of them.

One other oddity is that this looks and feels like a self-published book, despite having an apparent publisher and being well edited. Certainly the author seems unfamiliar with mainstream publishing, as he puts one character on a book tour in the UK (which hardly ever happen) for a book which the character admits is an academic tome that will only sell a few copies. This is probably the strangest part of the story, and surely one the detective should have investigated further.

A Murder for Christmas is available from amazon.co.uk and amazon.com
Using these links earns us commission at no cost to you

... and if you too are still hunting, my murder mystery novel A Timely Confession is also a Christmas-set mystery.