Review: Murder at the Old Vicarage 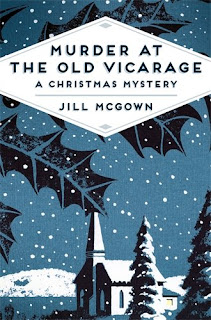 I'm still on my hunt for the ideal Christmas read for the murder mystery lover...

Intriguingly, the presentation of this novel is both accurate and misleading at the same time - it's a quantum superposition of crime. On the one hand, the murder takes place in a vicarage (tick) at Christmas (tick) with lots of snow (tick). And there's no doubt that the title is a homage to Agatha Christie - in fact, the last line of the book is 'Murder at the Vicarage, he thought as he got into the car. He must read it again some time.' However, the setting apart, this is a modern murder mystery with mostly modern characters (I'll mention a couple of exceptions) and a thoroughly up-to-date Britain.

Jill McGown skilfully pulls together a plot in which every one of the possible suspects really could have done it - I've not read her books before, but I'll certainly be back for more. Her detectives, as is common these days, have domestic issues, not helped by them having previously had a relationship, but one is now married to someone else.

The characters are largely well drawn. Those two exceptions who come from the stock characters cupboard are an old lady who appears a little out of it, but is really a very sharp observer (who does that remind us of? Okay, I'm sure it's intentional) and the vicar, who harks back to the 70s when all vicars in fiction had to have lost their faith.

I didn't see the ending coming and found the book an engaging read. If I have one criticism of the plotting: almost everyone seemed at some point to be lying to cover up for another person who they thought had done it, but who hadn't. They never seem to bother to talk to each other and check.

The modern setting means this book doesn't quite score as well as it could for a traditional Christmas murder mystery... but it is well written and keeps the reader guessing, so it has turned out to be one of my favourites for this year.

Murder at the Old Vicarage is available from amazon.co.uk and amazon.com
Using these links earns us commission at no cost to you

... and if you too are still hunting, my murder mystery novel A Timely Confession is also a Christmas-set mystery.