Americast vs The News Agents 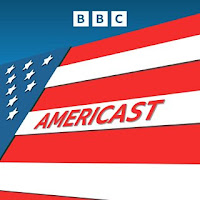 Interesting things are afoot in the world of UK news podcasts. The former presenters of the BBC's best podcast, Americast, have shifted to rival Global and have gone from a weekly-ish podcast to weekdaily one as The News Agents. Meanwhile, the BBC has just broadcast the first of a rebooted Americast. And the good news is, both are excellent.

Let's start with Americast. There was a real danger that when the original leads Emily Maitlis and Jon Sopel left that we would end up with a pale imitation, as happened when the Top Gear team departed. (Admittedly that was under more dubious circumstances - I don't think either Maitlis or Sopel punched anyone.) However, rather than replace the originals with amateurs, the BBC has been clever here. They've kept the solid, American third leg of the programme, Anthony Zurcher, and replaced the duo with a pair of BBC big hitters, Justin Webb and Sarah Smith.

Going on the first episode (which was confusingly launched on the Newscast podcast), Americast is in good hands. I think it's fair to say that Webb and Smith are yet to have the easy chemistry of Maitlis and Sopel - but the show had the mix of solid content and lightness of touch we've come to expect from Americast. I'll be sticking with it. 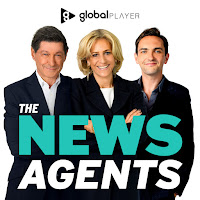 Meanwhile, we have Maitliss and Sopel, joined by Lewis Goodall (like Maitlis, from the BBC Newsnight TV show) as The News Agents. We've now had a few of their shows to listen to and they're coming along well. At the moment they are overdoing the cutesiness - referring to 'News Agents HQ' and giving everyone nicknames, which is mildly irritating, but the old Maitlis and Sopel magic is there and it's shaping up well.

One thing is certainly true: the podcast beats the BBC's equivalent, Newscast hands down. Newscast seems to have gone a bit downmarket having lost some of the political big hitters like Laura Kuenssberg and feels rather too much like a podcast version of the One Show on an off day. Main anchor Adam Fleming is reliable, and Kuenssberg's replacement Chris Mason not bad (though isn't so interesting), but the content isn't well focussed and rarely asks the searching questions. There's no doubt that The News Agents is the better of the two.

All in all, my podcast schedule is having a great week!