The Gap in the Curtain - John Buchan *** 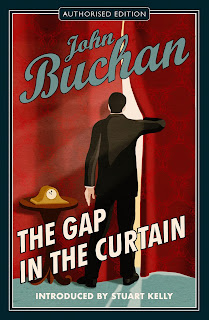 John Buchan is best known for his thriller The 39 Steps, filmed melodramatically by Alfred Hitchcock in 1935. The Gap in the Curtain is another period piece, first published in 1932, but it is anything but a conventional thriller. It's sometimes presented as science fiction, but it would more reasonably be described as fantasy: although the events it covers are supposedly triggered by the work of a scientist, the mechanism is pure fantasy.

We begin at a country house party, where a random selection of toffs are encouraged to take part in an experiment by the mysterious Professor Moe. By obsessing over a particular section of the Times newspaper for a while (plus the administration of a mystery drug), seven participants are set up to have a second's glance at a small section of the newspaper from one year in the future. In practice, two of the experimental subjects, including the narrator, don't undertake the final part, so five people are given a brief glimpse of the future. Some study a section of the paper relevant to their role - an MP, for example, finds out something about the future government - others seem to have picked part of the newspaper pretty much at random. The rest of the book then covers the subsequent year five times, once for the experience of each subject.

So far, so good - a nice, high concept plot. Although I like the Hitchcock film, I've never read any Buchan before - I found his style, frankly, rather clunky. The country house setting is like P. G. Wodehouse without the humour, and the first section progresses distinctly slowly. Things get rather better with the five individual sections. In each case, although the predicted text from the Times is correct, the outcome is different to the one that the participant expects. I did particularly enjoy the MP's section - there was a strange similarity with 2022 British politics, with the country facing dire economic straits and some MPs who were clearly only in it for what they could get for themselves. Although the people were fictional, it was interesting to get a feel for what early 1930s politics was like as a Labour government struggled with the problems of the day.

I did find it hard to warm to any of the characters - I love Wodehouse, and his lightweight protagonists are simply fun. Here, the entitled gentry, who make up pretty well all of the characters in the book, often feel repulsive to the modern viewpoint. I don't know if this was Buchan's intention, or whether he felt this was what upright British folk should be like. But this aspect wasn't too much of a problem as it really wasn't necessary to engage with the people - it's the plot that dominates.

All in all, though never a thrilling read (and the denouement of the last section was a distinct let-down), the period setting and the underlying idea made it well worth the read.

I do want to moan about a couple of aspects of the plot, so if you don't want a spoiler, don't read further.

Two of the five active participants in the experiment focus on the obituaries section of the paper - and both see their own death listed. This requires a ridiculous pile-up of coincidences. Firstly, why would they choose to look at this part of the paper anyway? Everyone else looked at a topic that interested them. Why didn't they look at a sporting page or whatever? More to the point, what are the chances that, purely accidentally, both of them were predicted to die the day before the day the paper was published? There was no suggestion that the experiment was the cause of their deaths - they simply had a glimpse through the titular 'gap in the curtain'.

One of the two death cases was handled quite well. The person effectively scared himself to death, with a little twist where he avoided the way he 'should have' died, but still died. The second, though, involved the  subject escaping his fate. That wasn't a bad idea - but the way that Buchan made this happen was to have an obscure relative die on the predicted date, whose name was the same, whose regiment had been incorrectly reported and whose birthdate had been misheard and put in wrong. A whole pile of unlikeliness. How much more interesting it could have been if someone (the narrator, for example) had sent a fake death notice the Times (inevitably with various obstacles to this happening). The piece would have appeared, but wouldn't really be true. Managed well, it would have been a far better ending than the pathetic list of coincidences and accidents Buchan uses. Moan over.

You can order The Gap in the Curtain at Amazon.co.uk, Amazon.com and Bookshop.org
Using these links earns us commission at no cost to you