Feng shui in a rational world

April 25, 2010
It's not long since I last mentioned feng shui, but it's pure coincidence that it has come up twice in my general attempt to stress the rational over the irrational - consider it a cluster. 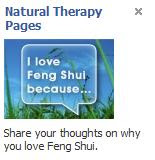 As before, it has become a topic because it has intruded into my life without me asking, in this case in the form of the advert from Facebook pictured on the right. I have to confess, the advertising on Facebook can be particularly pathetic. It tries hard to make use of information gleaned from your profile, but does so in such a hamfisted way that it make you chuckle, rather than rush to click through. So you (or rather I, because you aren't so ancient) will get an advert saying, SPECIAL OFFER FOR 54-YEAR-OLD PEOPLE! Yeah, right. And there isn't a bit of code that reads something like 'Print SPECIAL OFFER FOR {Field: age}-YEAR-OLD PEOPLE!'

Any road up, this morning up popped the offending ad you see here and it set off a small burst off fireworks in my brain (not a good idea before 10am on Sunday - do not try this at home).

First there was that title. 'Natural therapy.' Hmm. Two problems there. First, the use of natural as a magic word, or as I sometimes refer to it, a bogeyman. A loaded word that comes with all sorts of baggage attached. 'Natural' is one of the most powerful. It triggers all sorts of implications of nice and fluffy and harmless and good for you - which is why advertisers use it so much, even in a hugely artificial concoction like a shampoo. Our response to the word is so strong, we totally forget that nature is often anything but nice and fluffy, but is cold, hard and uncaring. The reason many things are artificial is because nature is so nasty. Try living a year in a forest with no artificial aids (i.e. nothing made by hand, so this includes any form of shelter, even one made out of natural products).

The second issue with 'natural' therapy is the suggestion that feng shui is in some sense 'natural'. (Sorry guys, but I can't help but pronounce it fehng shoe-ee in my head, not fung shway.) According to Wikipedia (perhaps I should have used Wiccapedia), feng shui is an ancient Chinese system of aesthetics believed to use the laws of both Heaven (astronomy) and Earth (geography) to help improve life by receiving positive qi. That sounds rather more supernatural than natural. The only sense it's natural is that it was natural to blame events on supernatural influences before we understood things better. So when the cow stopped giving milk, for instance, it was either the influence of the stars or the witch down the road. But we do understand things better now.

Frankly I find it offensive to suggest that astronomy and geography, both harmless disciplines that really do help us understand the universe, should in some sense gang up to have a magic influence on our lives. And that by doing silly things we can somehow manipulate these influences to increase 'qi', a magic form of energy that is somehow totally impossible to register on any instrument and that seems to have nothing to do with any of the fundemental forces of the universe. Hmm. Oh, and even more offensive that people are prepared to take gullible punters' money for doing feng shui readings, or whatever they call them.

So, I am afraid my only answer to 'I love feng shui because...' is 'because it gives me something to rant about on Sunday morning.' I titled this post Feng shui in a rational world. I know, really it isn't a very rational world, thoughI like to think that science is doing its bit to make it a little more so. But there are always forces ranked against rationality. And this is one of them.
rant rational behaviour science woo