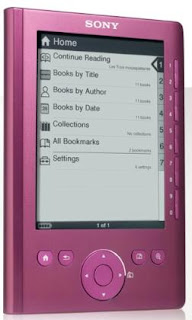 In the old story of Alladin, the evil uncle offers new lamps for old in order to get hold of the genie's lamp. Now (the I'm sure anything-but-evil) Sony is offering new books for old, sort of.

We're used to trade-ins on cars, and sometimes on electronic goods or white goods. But for the first time I can recall, Sony is offering a trade in for an old book. Bring in any old tome before 11 July (as they put it 'even a dusty old paperback') and they'll give you a £20 discount at their Sony Centres (and other participating stores) on the Pocket Edition of their ebook reader.

I heard this briefly mentioned in a radio ad, and just had to follow it up. I don't know why, but there's something much more emotive about trading a book in than a car. It's almost as if they had asked you to trade in a family pet. Many of my 'dusty old paperbacks' are old friends I wouldn't want to part with. I've never been one for the 'ebook readers are rubbish, they don't smell like a real book' line. (Perhaps because my sense of smell is terrible.) But there are certainly some books I would be reluctant to part with. Just imagine if this had been a 'get rid of your whole library in exchange for ebook content' deal. That would feel uncomfortable.

Realistically, though, we've all got a few books that we would be happy to part with. That L. Ron Hubbard book Auntie Vi bought you for Christmas ('You do like science, don't you dear?') Or the 23rd cookbook you've added to your shelves but never opened. And as such it's not a bad deal. And to make it more attractive, if you register your reader by 11th July they're throwing in a voucher for up to five ebook titles in 'Love Football' or 'Hate Football' packages. (Is there some football thing happening this summer?)

When I tested ebook readers for Good Housekeeping, I liked the Pocket Edition (though personally I'm sticking to paper and occasional ebooks on my iPhone), so if you are in the market for a reader, you could do worse than turning up at a Sony Centre clutching a Mills and Boon.
ebook readers promotions trade-ins