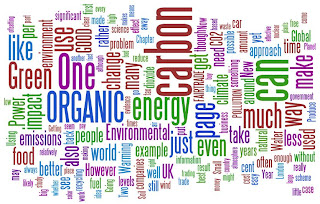 'Sustainable' is a word you hear banded about a lot these days. As I describe in Ecologic, it's a term that is often used because it sounds good, without thinking through what it really means.

Unfortunately, all too often, people try to give the impression of having full fat sustainability by sleight of hand. They try to make it look as if they are truly sustainable, while passing on the problems to someone else. There was a great example of this in the news recently. The Register reported on a 'zero energy' house that was anything but. This California building had won awards for its sustainability. Yet this was no hut in the woods, existing on burning willow twigs - it was a big modern construction ablaze with power.

So how did they acheive this? Vast solar panels, wind turbines and banks of energy stores? Nope. By not including the use of natural gas in their zero energy calculations. When the gas usage was taken into account, the house used more fossil fuel energy than an average house in the area. Hmm.

Organic farms play similar tricks to claim to be sustainable, though they do it more subtly. The fact is, an organic farm can't do what it claims, because it has matter going out (the food produced) so needs something coming in to replace that matter. Some of it, admittedly, can come from the air. Carbon, for instance, from carbon dioxide and a certain amount of nitrogen from the air too using plants like clover that 'fix' nitrogen. There's water from rain as well. But that doesn't provide everything that's needed.

Nitrogen, for example, comes in part from manure. But that just shifts the nitrogen input to the animals' feedstuff where not enough can be got from nitrogen fixers. (Incidentally it also means that organic farms pretty well have to be mixed farms to produce that manure, so they can't take the true green route and do away with greenhouse gas belching meat animals.)  So organic farms buy in nitrogen-rich feed from other organic farms. But of course that means those farms become depleted of nitrogen. And at some point the buck has to stop.

One of the tricks used at this point is to buy straw from a conventional farm. This is allowed, because it's bedding, not food, so it's okay that the nitrogen has come from a nitrogen fertiliser. But, of course, the animals don't know it's bedding. They eat it, gain the nitrogen, and the 'sustainable' organic system can pretend it never got nitrogen from artificial fertilisers.

There's even worse fiddling of the books to get in important trace elements like potassium. Such is the organic movement's aversion to 'chemicals' they will go wildly out of their way to use something that sounds natural, even though it's a much less effective source than many alternatives. All trace elements are chemicals, guys. Get over it. More to the point here, they all have to be brought in. They can't be produced from the air. A farm can't be sustainable in minerals.

There's nothing wrong with calling an organic farm sustainable lite - but it can never be full fat sustainable. Sustainability is an excellent goal, but playing a game of 'find the lady' to conceal your inputs (especially as ineptly as was the case with the zero energy house) discredits the term.
ecologic farming houses