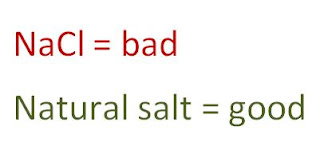 I am always amazed by the power of the word 'natural'. It can transform the most rubbish product into something desirable. And conscious though I am of this manipulation, I still feel the pull of its siren call.

The same goes for terms that imply natural. I'm a sucker for crisps that say they have 'sea salt' rather than boring old 'salt.' And yet, when we rush out and buy sea salt at inflated prices, what are we actually getting for our money?

First of all, very little difference in taste. I've never seen it done but I can predict that the best of chefs, faced with the same stew (or crisps) flavoured with sea salt and mined salt in a double blind trial couldn't taste the difference. The trouble is if they ever make the comparison they will taste a bit of fine grained mined salt and some chunky crystallized sea salt and say 'yes there's a difference' - which there is, but it's all down to texture.

Second there's the matter of purity. A lot of people go for 'natural' things (or organics, but let's not get into the travesty that is organic salt) because they have less impurities. Yet sea salt has a lot more impurities than mined salt (which also has more nasties in it than 'chemical' sodium chloride). Don't get me wrong, these impurities are at such trace levels that they can have no disbenefit, but they are there.

Finally it has just occured to me that mined salt is more natural than sea salt. Mined salt is naturally occuring salt that has been dug up out of the ground. But sea water doesn't contain salt - it contains a mix of ions. Salt is only produced when the seawater is processed. So sea salt is manufactured salt, where mined salt is natural salt. Hmmmm.

And that's the trouble with basing your choices on loaded adjectives. But it won't stop me lusting after crisps with sea salt and balsamic vinegar. What a wuss.