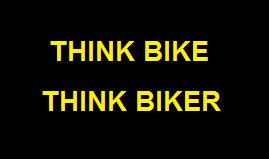 Every now and then the people in charge of the information on motorways get bored. If they have no warnings to give on those big signs, they put up a slogan or two. Now, I think they're missing a real opportunity here. Rather than saying 'Tiredness kills/Take a break' they ought to say something truly outrageous, like 'Slow/UFO ahead'. That way drivers would really wake up and take attention.

Or they could copy the old US Burma-Shave signs that Bill Bryson is so fond of. The ones with the little rhyming slogans on a series of signs, for example: On curves ahead/Remember sonny/That rabbit's foot/Didn't save/The bunny/Burma-Shave - something like that would really make drivers sit up and pay attention. But no, they have to go for rather dull and worthy reminders.

One that was in evidence on the M4 yesterday is illustrated above, and I think it's a disaster of a slogan. As a motorist when I 'think bike' I think of really dangerous hazards that don't just cause near accidents every time you pass them, but have a tendency to ride across red lights and generally make things even more dangerous than they should be. Since this is a motorway we're on, where bikes are banned, I naturally assume this must be some kind of kamikaze bike, probably fitted with anti-vehicle missiles. Not a healthy thought when heading down the M4 at 70 mph.

As for 'think biker' - this is just wrong. If they'd said 'think motorcyclist' it would have been different. Then I would have imagined a weedy thin bloke with glasses who drones on about his Vincent Black Shadow (or whatever it is) and is the road's equivalent of a trainspotter. This is the kind of person you would want to look out for and preserve. However, when I 'think biker' I think of some Hell's Angels type with a long beard and unwashed clothes who is about to smash up your town and kidnap your women/men/dogs for their own pleasure. In other words, the kind of person you need to take out before they take you out in good Mad Max style. Do they really want me to 'think biker'?