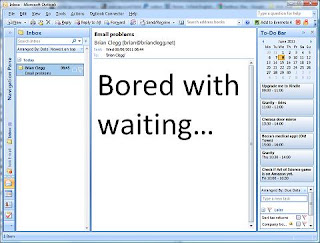 I've have just emerged from around a week of email hell. Something had gone wrong with the mechanism by which emails were retrieved from my POP mailboxes to arrive in Outlook, meaning even a little iddy biddy text email could take a minute to arrive. Anything with an attachment was simply too big ever to make it.

I naturally reported this to my hosting company, who faffed around a bit with no obvious outcome. But a day or so later they started displaying a notice saying that customers who used BT to get to their servers were experiencing slow-downs. Ah-hah! Time to get the well-oiled BT support machine whirring into action.

Their first suggestion was an interesting one. I was to try pathping. I was vaguely aware that ping is a program for checking that a device on the internet is 'there' - pathping is apparently a cunning extended version of this that pings every hop along the way between your router and the final destination, and also does a test detecting packet loss at each stage. That sounded fun. Only pathping wouldn't work. So I moaned to BT.

So at this stage I was getting nowhere fast, when I happened to have a quick discussion with Peet Morris, someone I've known since my BA days when he used to come in as a programming guru to snigger at our attempts to program PCs. At this point my web host and BT had taken about 5 days to come up with nothing. Peet came back about 20 minutes later saying 'Have you tried "run as administrator" for pathping?'

I didn't want to admit I hadn't a clue what he was talking about, so a few seconds furkling in the Windows help system came up with the fact that you can right click a program and select 'run as administrator' which forces you into full adminstrator mode even if the PC isn't set up that way. I did this on the Cmd window and low and behold pathping worked. It shouldn't have been a problem because I am an adminstrator (in fact the only user on the PC), but it was.

Unfortunately pathping didn't help, because it came back saying all was hunkydory along the 13 or so hops it took to get from my router to the email server. No matter. Peet to the rescue again. He made a suggestion that actually fixed the problem (while BT still hadn't a clue). Now he made this suggestion for a fairly complex technical reason involving re-assignment of IP addresses, but the fact is it is a solution I should have thought of myself. In fact it's a solution Goldie, my dog, could have come up with. (No offence, Peet.)

It's what, in the mists of time, we used to call the 'big red switch' solution. When I first worked with PCs back in the early 80s we were using the first IBM PCs. On the side of the PC box was a really chunky red switch. It was the on-off switch. In the early days PCs often locked up and the inevitable solution was the big red switch. Switch it off and on again. My current PC doesn't have a big red switch - it's a rather sexy blue glowing thing. More to the point, neither does my router. But I duly switched the router off and on again. And guess what? Emails were suddenly winging their way in with the speed of... something very quick.

How could I, who ran the British Airways PC department at one point, have forgotten that most fundamental of solutions to all known problems? The big red switch.