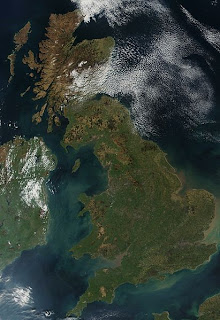 Listening to the radio the other day I heard that parts of the UK are in a state of drought. This a trifle ironic after a weekend of heavy rain, but that wasn't enough to make the problems go away. We have had less water for this time of year than has been seen in the last 100 years. Looking at an aerial picture of the UK there seems to be something wrong with this idea that we could ever be short of water - we are surrounded by the stuff. The statistics are stunning.

With a reasonable consumption of 5 litres per person per day, the water in the world would last for 116,219,178 years. And that assumes that we permanently use up water. In practice, much of the water we ‘consume’ soon becomes available again for future use.  Even at 10,000 litres per person per day (a more reasonable estimate of our consumption if you add in the production of the goods we consume), we still should have enough to last us over 57,000 years without adding back any reusable water.

So why don't we take water out of the sea? With global warming this would be doubly beneficial. We are told that sea level rise could cause serious problems by the end of the century. You will hear that desalination is too expensive. But surely this is because no one is putting any significant investment into the research and development needed to make it cost effective (plus there's a lack of investment in alternative energy sources like nuclear fusion, as desalination takes a lot of energy).

Let's be clear. There is no water shortage. There is a shortage of the kind of long term thinking needed to provide a solution to the problems the world - and the UK - faces.

Image from NASA via Google