Look first, then tell the world

November 27, 2012
With some regularity I get sent emails about scams, viruses and strange things that Facebook is going to do. Almost always these are accompanied by a request to pass them on the world and its aunty. And there's the thing. Because almost always these dire warnings (some of them very dire) are themselves a form of virus. What they describe is totally fictional, a hoax that by panicking people into spreading the word, reproduces and travels the world. It is this 'chain letter' effect that is, in fact, the awful payload.

Whenever I get these warning emails and Facebook messages my first step is to pop over to Snopes (thanks to Andy Grüneberg for introducing this to me many years ago). Snopes is primarily a way of checking out urban myths, but most of the time these spoof warnings also get a write-up.

So, for instance, I recently got an email from someone, asking me to pass on to everyone I know a warning about cards being left by Parcel Delivery Service. Anyone who rang up to have their parcel redirected got landed with a bill of £315 for making a phone call to a premium rate number. There was, of course, no parcel. This warning is vastly out of date. The scam did exist - but the bill was £9 not £315. More to the point, the number being warned about was deactivated in 2005. It was a real problem (and may well still be with a different name and number) - but the specific warning doing the rounds in 2012 was 7 years out of date. It was a ghost warning, a Flying Dutchman of a warning. 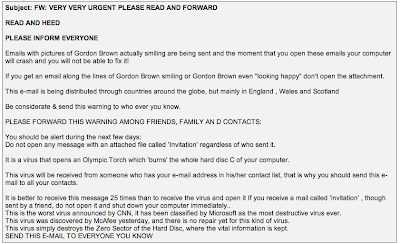 I was also warned about a virus that showed a happy smiling Gordon Brown (okay, that's weird, I admit). PLEASE INFORM EVERYONE said the much copied message. Open the attachment with Gordon's pic and your PC will be trashed by an 'Olympic Torch' that burns your whole hard disc. Don't get me wrong. Viruses exist and can do damage. But whenever you get an email or Facebook message it's worth checking, because chances are that these 'Pass it on to everyone' messages are fakes.

When I've established it's a fake there's the difficult decision. It's not to bad if the warning was simply a Facebook post. You can just add a comment. But it's harder when someone has just sent the warning to everyone in their address book. Do you point out it's a spoof? Probably you should, as really they should be warning all their friends not to pass on this message. But it always seems a bit mean.

So here's the thing. Next time you hear about a terrible email that will make your computer explode if you open it, or the latest phone scam, or Facebook's latest outrageous terms and conditions, pop over to Snopes first (another good source is Hoax Slayer) pop in a few keywords and check it out. You could save yourself time and embarrassment.