The Sigil - SF with the bones left in 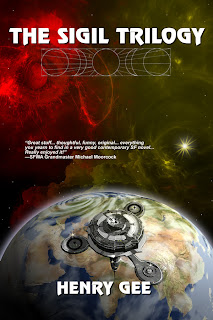 When I was a teenager I very much enjoyed E. E. 'Doc' Smith's Lensman series. These six novels were, frankly, pretty poorly written - but the sweep of the story arc - the sheer scale of a storyline that spanned over 2 billion years - was astounding. And in some ways, the Sigil trilogy by Henry Gee, which I've just finished reading, has a similar impact (though the writing is considerably better). And yet it's not really 'space opera', because most of the action takes place on Earth.

Some of the ideas in these books are astonishing, with the sun threatened by a herd of star-eating phenomena (not exactly living, but sort of) that were created soon after the big bang, an Earth civilization going back millions of years and the discovery of a whole range of hominids other than Homo sapiens still living on Earth, plus an archeological dig uncovering a vast underground city older than any known human civilisation and a massive space battle millions of years ago. That's a whole lot to conjure with.

This is without doubt 'hard' science fiction in the sense that the science plays a central role and as much as possible is real science - though unusually, thanks to Gee's background in palaeontology, there is not just fancy physics but a lot about the development of different hominid species too. And yet these books do not shy away from the softer aspects of life. There's a lot about people in here. And a lot of religion. Somewhat surprisingly, Catholics probably get the best of the deal. You won't be put off you are an atheist - but you do need to be prepared to think a bit about religion, rather than just dismiss it with a Dawkinsian knee-jerk reaction.

There is also sex. Rather a lot of sex. You'll be pleased to know it's no 50 Shades, but there are some fairly explicit scenes and language, so you might think twice before giving it to a 12-year-old. Interestingly quite a lot of the sex is not between humans, but is still made fairly steamy. There is also some stomach-churning description of man's (or at least hominid's) inhumanity to man - one image will stay with me forever, and I'd rather it didn't. So not always a pleasant read - and quite spooky when I happened to get onto a section where Israel is under a massive attack at almost exactly the same time as the latest escalation of violence in the Middle East.

There are things I wish were different. I'm not a great fan of long books, and taking the trilogy as a whole (because it's not really three separate books), it was too long for me. I also found the way chapter-to-chapter it jumps back and forward in time, sometimes millions of years, confusing. I am a bear of little brain when it comes to fiction. Too many flashbacks in a movie or book leave me floundering, and here, pretty well every other a chapter is a flashback to around six different times in the past. In fact at one point, when the main 'current' timeline story was particularly gripping, I confess I skipped an entire flashback chapter just to get on with it.

If I was going to be really picky, I also don't understand how one of the main characters can suddenly pull the whole thing together with an explanation near the end. It's useful, but I don't know how he knows (even though he is the Pope (don't ask)). Overall, though, this is a book I'm really glad I read - and if you like science fiction with a sweeping scale, and can cope with a mix of sex, violence, philosophy and religion in your SF, this is unmissable. I don't want to give too much away, but the central concept is as outrageously impressive as Douglas Adams' idea of the Earth being a computer set up by the mice that is destroyed just before it can come up with an answer (in fact, come to think of it, there are even certain parallels...)

The Sigil comes in three books - Siege of Stars, Scourge of Stars and Rage of Stars, but really it's all one big book which you can buy in one lump (something I'd recommend), either as a paperback or an ebook. You can get it straight from the publisher's site in all formats, or from Amazon.co.uk as paperback, Amazon.co.uk on Kindle (this is individual books, for some reason the single ebook version isn't on Amazon) or Amazon.com as paperback and Amazon.com for Kindle.
Using these links earns us commission at no cost to you