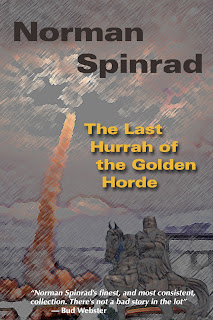 When I was purchasing Henry Gee's Sigil trilogy from Reanimus Press (review of Henry's masterpiece to follow - I haven't had a chance to read it yet), I noticed they had reprints of some classic science fiction. I'm a sucker for this - my SF enthusiasm peaked in the 60s and 70s, so anyone who has emerged since isn't really on my radar (seriously - I consider Ben Bova trendy). Something that caught my eye was a book of short stories by Norman Spinrad. To be honest he's not an author I had had much to do with, but it was reasonably priced, and short stories are idea for ebook reading, so I downloaded a copy of The Last Hurrah of the Golden Horde - and I am so glad I did.

Although these stories are probably 50 years old, they are mostly timeless. Okay, one or two have a slightly dated feel to the female characters, and there are a couple where the technology caught him out, but story after story was brilliant - really exploring the implications of different types of life and world for very ordinary human beings. I particularly liked the way he thought through the commercial implications of interstellar flight.

With the exception of the last two pieces (including the title story), which seem to have been strongly influenced by the SF 'new wave' urge to write something that doesn't make a lot of sense, these are some of the best SF stories I have read in a long time. They work so well on the iPad too. Highly recommended if you like this kind of thing.

You can download the book direct from the publisher, or get it on Kindle from Amazon.co.uk or Amazon.com.
Using these links earns us commission at no cost to you