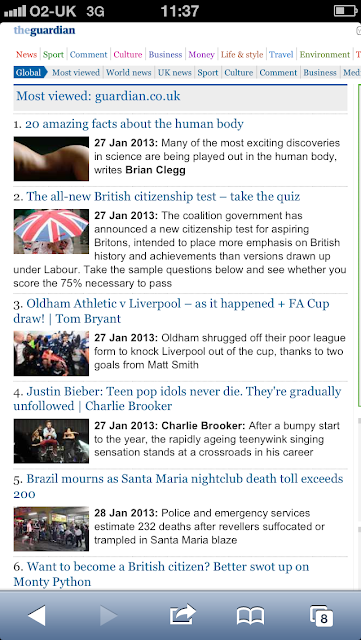 However, I had a piece on 20 amazing human body science facts in the Observer on Sunday, and for some reason it caught the readers' imagination. On Monday morning it was pointed to me that it was the most viewed piece on the Guardian/Observer website. I pulled up the listing and there it was at the top. Above Andy Murray and his defeat, which was in second place.

By the time I grabbed the picture Murray had slipped out of the top six - but I did comfortably beat Andy Murray. And came higher in the charts than Justin Bieber.

I too have slipped off the list now - such is the inevitable fickle nature of news, but I do know that in those first couple of days, the article had more than three times as many page views as this blog has had in its entire lifetime.

And who said the press has no influence anymore?