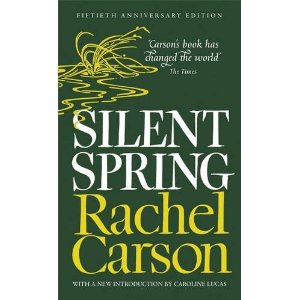 I was listening to a programme on the radio the other day about Rachel Carson, arguably one of the founders of the environmental movement, whose 1960s book Silent Spring had such a huge influence, particularly on the banning of DDT. The programme was little short of a hagiography. You would not think, listening to it, that there was any controversy about Carson's influence - yet some would say that she was responsible for millions of deaths.

There is no doubt at all that the way DDT was being used in some countries when Carson wrote her book - in America in particular - was wrong. This potent compound was being sprayed in a blanket fashion as an agricultural pesticide and was causing much damage to the environment and quite possibly to people. This was, without doubt, dire - and Carson did the world a favour by pointing out the terrible consequences, like the eponymous idea of killing the birds and producing a 'silent spring.'

However, it is also true that used in a controlled fashion, targeted on areas where mosquitoes breed, DDT was a very effective way of reducing the spread of malaria. Had it not been banned, a ban instituted in large part as a reaction to Silent Spring, and had it been used in an appropriately controlled way, there would have been millions of lived saved.

This Silent Spring dilemma illustrates the biggest problem the traditional green movement has. It is often based on knee-jerk reactions to words and concepts. Natural good; artificial bad. Chemical bad (forgetting that every substance we eat, drink and breathe is made of chemicals). Organic good, intensive bad. Burning wood good, using nuclear power bad. And, in this case, pesticide very bad. If we really want to be green and be rational we need to think through the implications of words in context, not just react to the words themselves. Most things are good in some circumstances and bad in others. Often it's a case that doing something to excess is bad, while doing it in a controlled way is good.

The devil is in the detail. Unless we can get down to that detail and really understand the science that often lurks behind it, we will be like people who respond to advertising and marketing, rather than understanding what's really good for us. And surely an ignorant, marketing-led response not the right way to be green?

This has been a green heretic production.