Revenue management for a new century 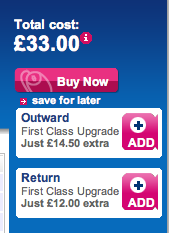 There are some businesses that have an unusual problem. They sell commodities that have a value up to a certain point in time, but that value drops to zero after that moment. A classic example is an airline's inventory. The value of an airline seat drops to zero at the moment the check-in closes. The realization of this simple fact changed the way airlines sold seats in the 1980s and 1990s, pumping up revenue significantly. How does this knowledge make you money? Because with the right systems, as time runs out, you can sell off the seat that won't go at full price much cheaper and provided you cover the incremental costs of carrying the passenger, then you are still making extra profit.

I bring this up, because it struck me there was a new, more interesting possibility that could easily be made available to push up profits even further. I was buying a railway ticket online and, as you can see, the system generously offered to bump me up to first class for a suitable extra bit of cash. Now here's the interesting bit. I am too tight to pay what it was asking - but I would have paid something extra to get a first class seat. The chances are that the train will travel with lots of empty first class seats. They usually do. So why not let the customer say what they would pay for an upgrade. Let's say I was prepared to pay £7. With a suitable algorithm, the system could decide whether or not to accept my offer. If it did, the the rail company would still benefit. And I'd be happy too. Win-win.

In principle a haggling system could also be applied to buying a seat in the first place, but it could be brought in painlessly by starting with upgrades, a situation where you already have the customer and it's just a matter of seeing how much you can get out of them. But remember this isn't a case of the nasty company squeezing the customer for every last penny - because the customer benefits too, getting something they would like at a cheaper price. As a customer I want haggling.

It's interesting that it is only now, decades after computer booking systems were introduced, that they are getting clever enough to cope with that oldest of human negotiating tools, haggling. I think the technology could be made to work now. It's just a matter of a company having the guts to give it a try.